And now, good people, a special treat. Writer and music collector/appreciator Bruce Jenkins guests on the ‘Bin about one of his favourite songs, and albums and in the popular style of this humble blog, no less … 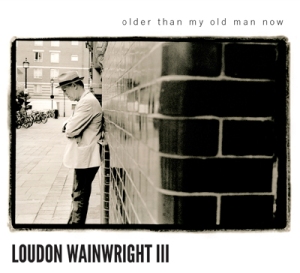 Listen to this track by self-revealing songwriter and one-time ‘Next Bob Dylan’ Loudon Wainwright III. It’s “The Here and the Now”, opening song on his 2012 album Older Than My Old Man Now. This autobiographical collection showcases the wry wit and sly humour of a man whose fame peaked with the unexpected Top 40 novelty hit “Dead Skunk” back in 1972.

With a CV that includes over two dozen albums, several marriages, a couple of musically gifted children (daughter Martha and son Rufus) and a considerable amount of therapy, you would imagine there was abundant material for an entertaining memoir. But no. Rather than typing 350 pages of reminisce, LWIII set himself the challenge of encapsulating his life in a 3 1/2 minute song. And he gets familial help.

Despite some very public spats over the years, all four offspring, his current spouse plus an ex-wife all join Loudon for “The Here and the Now”. It is funny, touching, and as neat an encapsulation of a life in popular song as you are ever likely to year.

I took a wife, we had some kids,

Screwed that up and went on the skids”

It’s the disarming candour about his own failings and short-comings that make this such an endearing song. (John Scofield’s liquid guitar fills help too). The writer has lived, loved, and royally stuffed up but he doesn’t take the easy road of excuses or pointing the finger.

I could blame it on the great unknown,

Or as a kid what I was told and shown.

But I blame myself and I blame her –

The cruel and foolish people that we were.

The richness lies in shining the light of reflection and self-awareness on those flaws and imperfections. What family is not dysfunctional? A bit crazy? Though he may have contributed more than his share to the strife and rupture, some sort of wisdom has arrived, eventually: No-one wins in a family war (“All in a Family”).

Yet for all their importance, relationships and family life are just features of the landscape we pass through on the way to the ultimate destination: death. Mortality is the core theme in Older Than My Old Man Now. All the songs mentioned so far allude to death, as do the title track and several others.

“Double Lifetime” is a duet with Ramblin’ Jack Elliott where the nudge-wink bravado of the protagonists fools no-one. We may want another ride on the life carousel, but we ain’t gettin’ one. In “Ghost Blues” the singer muses on his funeral and the life that preceded it, but it’s seeing how his dog misses him that makes him wish for oblivion.

But it’s not all gloom and despondency. There is a mordant humour in “My Meds” that evokes Tom Lehrer… and then you read Loudon’s entertaining track notes to find that he asked the venerable satirist to join him on the song. Sadly, Mr Lehrer declined.

Music Hall duet “I Remember Sex” pairs LWIII with Dame Edna Everage. Some of the lines are LOL funny…

“I remember sex – I started on my own.

When you and I stopped having it, I tried it on the phone”

… yet there is something ever so slightly creepy about Loudon and the Grand Dame of Drag singing about sex together, even in the past tense. One other miss is “Date Line”, a slightly strained song about time zones that doesn’t enhance the prevailing themes. Probably should’ve been left for the next ‘Rarities’ collection.

Knowing the relationship tension between Loudon and son Rufus adds piquancy to their collaboration “The Days That We Die”; it is notable that they alternate verses rather than sing together. Yet recording the song at all speaks of hope for further repair. I hope so, for both their sakes, because as Dad reminds us, the hour-glass sands only run one way and that’s towards the album closer “Something’s Out to Get Me”. Yep, it’s that other Father, Time, with whom no negotiation is possible.

If you have read this far, it is likely that you fall into one of 3 categories:

(a)  You are a fan of Loudon Wainwright III and that loyalty brought you here;

(b)Most posts at The Delete Bin are interesting, maybe even this guest spot;

(c)  You are of an age where advancing years and mortality are suddenly more meaningful to you; the insouciance of youth is long gone.

And (c) is why the album has received neither the plaudits nor the attention it deserves. Chances are that if you are categories (a) or (b), you don’t really get it. Even with the musical dexterity of Mose Allison, the wit of Tom Lehrer and the vocal phrasing of Hoagy Carmichael, Loudon Wainwright III is still singing about death. What’s more, he’s letting you know that your number will inevitably come up too.

So what are you going to do about that?

Well, Under 30s will shrug and find something relevant to listen to. Under 50s will mutter ‘Yes, yes, I know, but I don’t have time for that now’. But if you are pushing towards Loudon’s age (or beyond), it is a damn sight harder to bury your head in the sand. The prospect that the rest of you will join your head is inescapable.

So don’t turn off, tune out, or drop dead. Join LWIII in his wry, poignant yet ultimately hopeful quest to embrace the life you have had, and still have. For now.

Thanks, Bruce! You can read more from Bruce at his excellent vinyl records-themed blog Vinyl Connection.