Listen to this track by smooth pop-soul crooner with the sonorous baritone voice, Brook Benton. It’s “Rainy Night In Georgia”, his biggest hit and something of a return to the top ten for a stretch of time after his prime period from the early 1960s. It appears on the album Brook Benton Today, released in 1970.

The song was written by Tony Joe White in 1962 around the time that Brook Benton was having his greatest successes as a songwriter and singer with material of his own. The song is taken from White’s time as a truck driver for the highway department in the titular state, often finding himself working alone on lonely nights in the days before he found success as a songwriter and performer.

By the time Brook Benton recorded the song, he’d not had a hit for some time. But this one would take him to the top ten on both the pop charts as well as the R&B charts, and become one of his best-known songs.

This could be because of the supreme gravitas of what Benton brings to his performance with a signature baritone voice that blurs the lines between pop and soul. The emotional depth in his voice brings this song to life, suggesting a whole novel’s worth of drama underneath a nocturnal landscape of desolation, and raw human loneliness. And with that, it becomes something more than just a tale of one man’s lonely journey, and approaches something more universal.

Benton’s experience in putting across pop songs stretched back almost twenty years by the time he’d recorded this song. His work as a songwriter working up songs for Nat King Cole, Clyde McPhatter, and others would give him a solid basis for  understanding the mechanics of how a song is constructed, and its text and subtext . When he was encouraged to record his own material by the end of the 1950s, he would prove to have an impressive stylistic range, duetting with none other than Dinah Washington, as well as having pop hits as a solo artist from 1959.

His material from his peak period in the early 1960s is marked by clean production, breezy string arrangements, and by a clear and enunciated vocal delivery that was rooted in soul music, yet also demonstrated the refinement of a pop crooner. All of this would make for several hit records (one of them was actually called “Hit Record”!) he’d put out at that point.

“Rainy Night In Georgia” became one of his most recognized songs after a time that he himself had wandered artistically, standing out from his earlier material and for a number of reasons. One of those reasons is its timing, which is an important factor in any successful hit single. By the end of the 1960s, the world was no longer the post-war dream of the 1950s that middle-class families had once enjoyed. Although there were great social political strides in the environmental movement, in the development of equal rights legislation, and in less racial segregation in mainstream culture , in many ways it was a very dark time too.

By 1970, the presence of anti-war protests were common fixtures on American college campuses and cities, particularly when Nixon ordered the invasion of Cambodia and Laos, making it seem like conflict there and in the ongoing war in Vietnam would never end. Protesters being shot by the National Guard at Kent state, and the shooting deaths of students at Jackson State University only ten days after that proved that the violence of war wasn’t just restricted to the battlefield abroad.  A war-weary nation comprised of all generations was coming to realize that perhaps it wasn’t as invincible as its Hollywood myths, or the media, had once asserted, and that its government was very fallible. The time of innocence of post-war America that was slowly eroding in the ’60s had faded completely by the time this song came out. 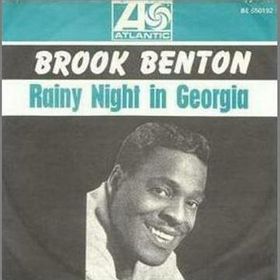 The melancholy in this song concerns itself with the lonely wanderings of a drifter seeking shelter and solace in the darkness of a rainy night. The narrator is disconnected from the world immediately around him, obscured as it is by darkness and by a downpour. And yet he has insight to the wider world, in tune with its troubles, and with the knowledge that the loneliness he feels is reflective of a greater loneliness felt by the whole world. Benton’s considerable vocal chops and solid command of the emotional undercurrents of this song make it a worthy showcase as to his skills as a first class interpreter.

Additionally, the song’s thematic gravity is a big part of what made this song so resonant at the time it came out. It was an era of violence that could be seen for the first time in history on the nightly news and in national newspapers thanks to wider media coverage of global events. General social upheaval was commonplace as generational cultures clashed, particularly as conservative organizations began to dig their heels in during the emerging women’s liberation movement, and the earliest proponents of gay rights were making cultural inroads. And uncertainty about the future for everyone regardless of their political persuasion swam beneath the surface of daily life, making many question the tenets of national identity that had been so well established in the post-war period. The hard rain that was expected to fall by those on the fringes of society in the early ’60s was coming down in buckets for everyone by 1970.

“Rainy Night In Georgia” was Brook Benton’s last major hit. He would continue to perform and record for the rest of the decade and into the 1980s, entertaining live audiences with his back catalogue of hits. He died in 1988 at the relatively young age of 56. But, this song that he made into a pop standard, and covered by many since, is still resonant today. Rain is still falling all over the world, perhaps raining harder than it ever has.

You can learn more about his career at soulwalking.co.uk.