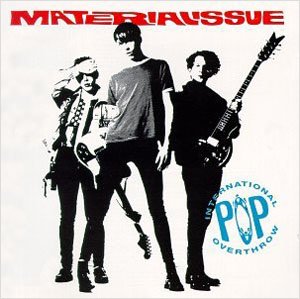 Listen to this track by effervescent Mid-Westerner power pop flame-keepers Material Issue. It’s “Diane”, a sugar rush of a track with a bitter aftertaste as it appears on their celebrated 1991 record International Pop Overthrow.

The year this came out, it was grunge this and Seattle that, which made it somewhat of a harder job getting noticed on the national scene being a power pop band in the Midwest. But, this band made up of singer, guitarist, and head songwriter Jim Ellison, along with bassist and vocalist Ted Asani, and drummer Mike Zelenko had quietly (and very inexpensively) worked up a record that captured the attention of music fans in the Chicago area, and managed to move units too.

It was thought that it would sell fewer than 100K worth of records. But, it ended up selling almost twice that; good news as they were on a major label (Mercury). This attracted the attention of the Billboard top 200, on which this record gained a respectable #86 showing.

So, what is it that made this band shine during a period of seemingly ubiquitous grunginess? And how does this song demonstrate the secret of their success? Well, I think it’s probably this; it dealt in classic rock n roll themes, and with a modern twist that had everything to do with a love of women, and not in the way you might think.

In a genre like power pop, women are central to the proceedings when it comes to writing songs. It’s a proud tradition in rock ‘n’ roll songwriting that has endured since Buddy declared his love for Peggy Sue, since Ritchie Valens serenaded Donna, and since Chuck Berry motorvated over the hill in pursuit of Maybellene. The naming of women in rock songs is a way to connect with an audience, specifically guys who are seeking to get the attention of a woman, maybe with that same name as is mentioned in the song in question. And in the ’90s, Material Issue made this a template, with Valerie, Renee, and Christine all making appearances on this record alone.

Of course, very often those women are held up as unattainable objects, with love very much out of reach, which the band also wove into their songs. Let’s take a look at this song on that score. For one thing, the titular woman has a vibrant inner life, and an independent spirit that cannot be contained.  She is a “superstar, everything you hoped you were”.  We’d all like to know a girl like Diane, or be one like her. On the surface, this is a celebration of strength in femininity. Cool, right?

Yeah, but then it gets dark. And all in one line:

Well I’ll pull you out and I’ll pin you down, Diane …

That’s what they call a twist of epic proportions, going from a paean to an admirable, vital, and independent woman, to a song about resentment, surveillance, and possession. That’s good songwriting friends, undercutting expectations, and shifting the tone of a narrative suddenly without making it a cheap shot. 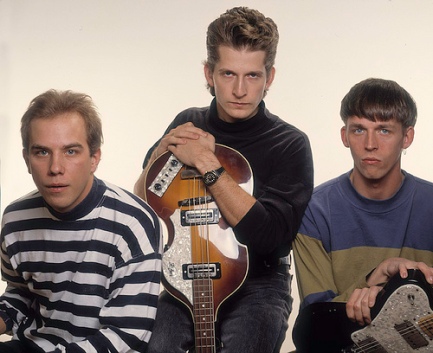 Power pop is often thought of as lightweight, and without much nuance. But, here that’s proven to be resoundingly untrue. There’s just as much thematic shading and moral ambiguity here as there is in any tune of an era known for those dynamics in songwriting. This song reveals a darker side to the standard power pop template of voicing the experience of  the well-meaning, nice-but-awkward nerd-hero. That one line meets the darkness found in many of the grunge tunes of the era, and surpasses it. This is no sympathetic narrator here, even if the buoyant melody and hook-laden playing that we love about power pop is still in place. Instead, this is a person who is potentially dangerous. Diane is in deep trouble with this guy, and not in a good way.

Material Issue would enjoy great reviews and solid sales on this album, and “Diane” reached a top ten placement on the Billboard Modern Rock chart. But, things wouldn’t stabilize for Material Issue. They experienced diminishing sales returns by the mid-90s. They’d be dropped from Mercury, and set to the task of finding a new label after working up new tunes that would eventually be released on their last album, Telecommando Americano in 1997. In the middle of this struggle, lead singer, guitarist, and songwriter Jim Ellison would commit suicide at the age of 32.

In 2011 on the occasion of the 20th anniversary of the release of International Pop Overthrow, Ted Asani and Mike Zelenko briefly reformed the band under a new name – Material Reissue – with singer-songwriter Phil Angotti, a contemporary and friend to the departed Ellison. Among other events they’d be involved with that year, the band were part of The International Pop Overthrow Festival, which is otherwise a series of festivals across the United States founded in 1998 that takes its name from the album. Learn more about it here.