Listen to this track by Chicagoan power-psych trio and returning pop contenders Hushdrops. It’s “Tomorrow”,  the lead track from their most recent double-album, and long awaited follow-up to 2003’s Volume 1 – Tomorrow.

This new record is a double, and expands on the band’s well-observed synthesis of ’60s psych, orchestral pop, British Invasion-inspired power pop, and jagged MBV drone-distortion melodicism across a generous 21 tracks. Tomorrow was a long time coming (as it were!), with each member of the band involved in various side projects over the years, touching on other acts including Veruca Salt, Plush, and The Waco Brothers. As mentioned, a wide spectrum of rock music tradition is touched upon here.

This opening and eponymous track reflects an interest in riff-driven rock music from multi-instrumentalist and singer  John San Juan, singer and drummer Joe Camarillo, and bassist Jim Shapiro, and delivering what a listener might expect to hear when catching the band live on the floor. But, since that spectrum is pretty wide, it’s really only a part of the whole story.

I had the chance to talk with John San Juan and Joe Camarillo from Hushdrops via email about their return to the studio, about the creation of a follow-up record with a pretty wide span of time having passed, and about re-engaging and re-inventing what Hushdrops means in 2014. Here’s what they said.

The Delete Bin: Tomorrow represents a return of the Hushdrops on record after a decade. What inspired its creation, and how did you all agree on an approach to putting the project together?

Joe Camarillo: These things take on a life of their own. Any living thing finds it way to “BE”.

John San Juan: I vividly remember Joe pitching the initial idea of following up Volume One with a far more visceral and less ornate statement. We were hitting a certain peak as a live band at the time, and Joe just proposed trying to make a record of that, with no frills . I don’t think Jim and I took any real persuading. There was no point in repeating the same approach (as with Volume 1). It was the type of commitment that periodically provoked a certain static within the band and recording personnel about just how FAR we could/should take the “warts and all” approach, but we certainly got pretty damn close to that ideal and result.

DB: The song “Tomorrow” bears the name of the whole record. How does this song figure into the whole landscape of the new album?

Joe: Tomorrow is the most perfect name for a Hushdrops record, ever.  It says so much…

John: It seems to carry the overall emotional theme pretty acutely. Sometimes you really need tomorrow. Anyone can feel hobbled by some present state of affairs or state of mind, and I don’t think it hurts to keep the eventual benefits of flux in one’s mind.

DB: It features guest vocalists Nora O’Connor and Steve Frisbie, plus John’s vocal melded into a sort of choir. It’s a unique sound even when compared to other tracks. Tell me about how the vocals were arranged.

Joe: Nora and Steve were kind enough and super-talented enough to contribute to the title track.  As I recall they also appear on “Have We Gone Too Far”, in the children’s chorus.

John: I can’t sing especially high. But, it was probably my favorite song and it called for that sound in that upper range. If you’ve ever sung with Nora or Steve, you’d have called them to sing on this song. I’m glad they showed up. Some people always sound good, you know? My voice was meant to be a guide vocal, but it blended with theirs in a really appropriate way for the song. I should probably thank them.

DB: “Tomorrow” is also re-visited later on during the running time in the form of “Tomorrow Once Again”, like a “Wild Honey Pie” kind of moment. What did you have in mind beyond that in terms of revisiting that musical theme?

Joe: My initial idea was to revisit the theme of “Tomorrow” as sort of a Jerry Dammers approach to his “Enjoy Yourself” reprise at the end of More Specials. Ours sort of took on a life all its own. It’s one of my happiest moments on the record.

DB: The theme of the future, searching for a path, and the uncertainty involved in doing it tempered with optimism is suggested by this tune, and backed up by many others on the record (“Have We Gone Too Far?”, “If We Go On This Way”, “You’ll Never Make It To Mars”, “Fight Fire With Rain”, and “Find Her” in particular).  When did this theme begin to emerge?

John: Probably when we were born. Maybe earlier? It’s indicated on the first record, and nearly everything I write has a certain “for everything gained, something is lost” happy/sad duality. Joe and Jim seem to have the same undercurrent. Best not to think about it too much.

Joe:  I can’t answer for everybody, but I feel that musicians reach a certain age where they think more of what could be and where they’ve been.

John: Real life is grainy and nuanced, and a reflection of that might have a musical value that more literal and fixed songs can’t have. I’ve certainly always hoped to put feelings or ideas out through music moreso than lyrics – I think if someone just sang me a song and spelled all of their ideas out hyper-explicitly…well,  dunno. What’s the point of that? Nearly everything I like has some amount of impressionistic suggestion, like My Bloody Valentine or Broadcast, and I find that a lot more attractive than the alternative.

DB: Each member of the band is involved in other musical projects, some of them pretty high-profile ones, too. How did each of you adjust your approach to suit the new material for a new Hushdrops record, and to the recording process itself?

Joe: For me there’s no real adjustment.  It’s just a natural thing for as long as I have been working with John.

John: There’s only one Hushdrops. I love every band I play with, but this is home. Like, put on pyjamas and eat pizza on the couch home. I’ve never had that with any other band. A number of the records I’d made with other people (fine records, I should qualify) seemed maybe a bit too labored and fancy for my own personal taste, so they might have informed me in some reactive and oppositional way. A lot of things I like (Van Halen, Led Zeppelin, Neil Young) seem to have a certain abandon, and it’s an approach that I’m certainly not finished exploring. I think if you could go through life with the tape rolling and not actually realize that you were being recorded – THAT seems like the way to do it. For me. 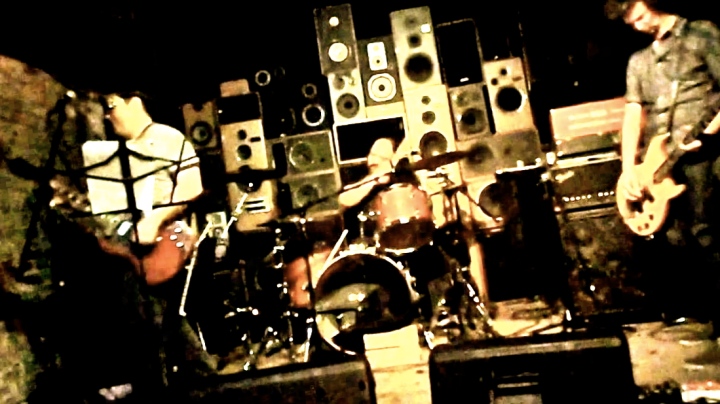 Joe: Being that the new album is in mono, new technology really doesn’t have much to do with it.  I recall using primarily vintage gear for the recording. Vintage tones.

John:  The tools and equipment involved in record making are no match for the personnel. If you get the right people together, you could make music on any medium. Consider that there are three studios credited on this record (and very nearly a fourth), and that should indicate that finding the optimal confluence of technology and personnel was something of a white whale for us. It helps to treat every experience as a lesson.

DB: What were your challenges in making Tomorrow as an old-school mono recording?

John: I cannot tell you how much opposition we initially encountered, which just seems odd. If it’s good enough for Pet Sounds or Sgt. Pepper or all the classic girl group, Motown, Stax, and garage records of that era – all this generally beloved and canonized music, you wouldn’t expect quite so much static. But, yeah, there seemed to be, initially, an ambience of “We don’t do that anymore” or “We CAN’T do that anymore”.

Joe: I only contributed two songs to the album, and for me it was all about how it would fit into the grand scheme of the album. That was my main concern. If it didn’t work it wouldn’t be there.

DB: Since there was a gap between the records, how was the material gathered as far as a backlog of existing demos, new songs written specifically for the record, or ones that emerged from jams in the studio?

John: I’ve never written to order, or to a deadline. So I really just had to let it happen. None were written specifically for the record. The bulk of the material comes from a specific period somewhere in the middle of that gap – and the remainder from either side.

Joe: Some old, some new, some borrowed, some blue…

John: The only real advantage to the gap was that most of the songs had been worked out and developed onstage, and that some older songs we’d forgotten about eventually re-emerged and presented themselves as more powerful and meaningful than we’d initially seen them. You find a comfy old shirt in a drawer and suddenly realize you should have been wearing it all along.

DB: It doesn’t sound like too many of the songs were worked out on the fly as you recorded.

John: I can’t see a group like ours doing that. I’m inclined to take a belittling view of the kind of group who “jam” their way into an idea. I like songs.  Having said that, no matter what I write, it doesn’t really “sing” until we play it as a band.

DB: So, between demos and live performances of the new material, how did the songs develop from their original forms to their final recorded versions?

John: A couple of the songs had been demoed. “This Town” wouldn’t be what it is without the demo Jim Mills of Extra greatly assisted me with.”If We Go On This Way” similarly gets a great deal of its character from Joe’s original demo, but mostly it seemed easier to just dig into them with Joe and Jim in rehearsal and on stage.

DB: You’ve managed to write and record a double while keeping it a cohesive statement. As a listener, to me it sounds  like it was pretty easy for you to achieve.

John: We certainly never intended to make a double. But, you probably shouldn’t take ten years between records if you don’t want to accumulate such an enormous backlog of material. And yes, there are songs we didn’t get around to recording. The virtue, I suppose, is that one can spend a lifetime investigating the nooks and crannies of a double LP. For me, things like Physical Graffiti or Zen Arcade have extended their lives greatly by virtue of the sheer scale. You could live with an album for ten years before something suddenly pops out of Side Three or Four and asserts itself in your musical heart.

DB: Now that the record’s out, what’s the next step?

Joe: Get as many people as we can to listen to it.  Get a major corporation to put us on tour forever.  Amen.

Learn more about Hushdrops on their official site.

You can buy the new Hushdrops record pretty easily right here. So, you probably should.

Also, you can buy the record digitally on iTunes.

Thanks to the guys in particular for sending me an advanced early copy of the album to help prep me for this piece.