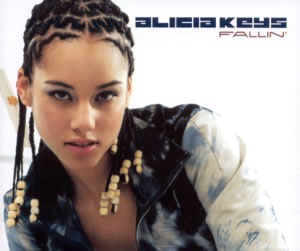 Listen to this track by neo-soul pianist, singer, songwriter, and R&B ingenue Alicia Keys. It’s “Fallin'”, the first single as taken from her debut record Songs In A Minor, a record that succeeded in making her the talk of the town when it was released in 2001. Part of that buzz was down to it’s classic feel, plugging into the spirit of classic soul music.

Further to that connection to music of past eras, the themes would be familiar too;  a troubled relationship that cannot be denied, despite the pain that is associated equally with the pleasure it brings. This is certainly a common theme in pop music, and R&B music from a woman’s point of view in particular, from Billie Holiday’s take on “Ain’t Nobody’s Business”, to Aretha Franklin’s “I Never Loved A Man The Way I love You”, to Keys’ contemporary Macy Gray, with her song “I Try” by the end of the 1990s.

How does that tradition play out here?

Keys would be a part of a new and celebrated strain of R&B singing in the latter days of the 20th century and into the 21st. This song would become her signature tune over the years. But, when it was first heard, it was rightly considered a revelation, with textures of the past referenced in its fabric, but with a distinctly modern feel at the same time. And this from a twenty-year old Keys, classically trained on the piano, and with an instinct for creating bittersweet love songs full of yearning and marked by distinct emotional shadows.

The song itself eschewed many of the run of the mill arrangements that typified a lot of R&B music by 2001, with warm piano and strings, and with vocals that didn’t scale the heights for their own sake, rather serving the emotional content without the usual bravado. The beats here are via drum machine, but they are subtle rather than insistent. And a complementary James Brown sample (“It’s a Man’s World“) that reflect the chord structure completes the backdrop for Keys’ voice, also subtle and not insistent. And once again, that’s another artistic decision that separates it from the herd. She doesn’t oversing it. The song’s drama is left to unfold as it does. And what drama!

As mentioned, this theme of dysfunctional yet undeniable love is a durable form in soul music and R&B. Falling in and out of love with someone who repulses and attracts seemingly all at once creates a friction and a sense of (that word again!) drama that draws a listener in. But, it also reflects the confusion that often typifies first loves, when hearts are young and with little experience to judge their emotions against what true love really means, what it costs, and most importantly what it shouldn’t cost. Of course, some of us never get there no matter how old we are, staying in situations that cause us pain, perhaps because it is all we know or all we feel we deserve.

The song resonated hugely with audiences, leading to Grammys, and to placements on “best songs in the universe” lists in a variety of  music publications. It was successful in giving Alicia Keys the momentum to carve out an enduring career. But, don’t try to sing along in A-minor in line with the song’s album title. It’s actually in E-minor.

Dysfunctional love affairs tend to throw you off your guard in the same way.

Alicia Keys is an active performer and songwriter today. Get up to date with her at Aliciakeys.com