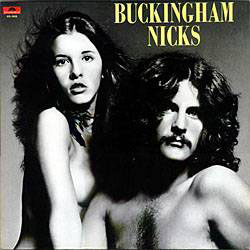 Listen to this track by future Fleetwood Mac stalwarts and Californian folk duo Lindsey Buckingham and Stevie Nicks, AKA Buckingham Nicks. It’s “Frozen Love”, the closing track to their 1973 pre-Mac record called, appropriately Buckingham Nicks. It would be their sole (to date!) album together as a duo.

The record was created when the two young musicians were championed by producer and engineer Keith Olson, in turn helped by sessioner Waddy Wachtel who would be a frequent collaborator with Stevie Nicks in her solo career years later. Before they were signed as a duo, Buckingham and Nicks had both been a part of a rock band, Fritz, that had served as an opening act for some of the biggest acts of the late-60s, including Big Brother & The Holding Company, The Jimi Hendrix Experience, and Jefferson Airplane. Before that, the two had known each other in high school, and had informally collaborated since they were teens.

When Fritz broke up, the two splintered into a duo, and eventually were signed to Polydor, whereupon they’d recorded this debut album that established both musicians as unique and supremely gifted singer-songwriters. But, the record didn’t sell, thanks to the inattention of Polydor at the time.

But, this track in particular would help to lead the two out of the pop music briar patch.

It’s not like this song, or the rest of the record, wasn’t an exceptional effort. Even here, you can hear that Buckingham’s guitar work alone is something special. It draws from folk-rock and country music, weaving in a shot of jazz straight down the middle to create something that would help to define rock guitar playing for the rest of the decade. And the way that Nicks’ voice wraps around that of her partner, a sultry and singular instrument even this early on, is extraordinary. That yearning quality in her voice which music fans would cherish  later on is evident here, too.

And the songwriting; it certainly pointed the way to where the two principles would go later in their careers, which were  not even conceived of by the time this song was laid down. This is a song about a relationship based on imbalance, co-dependence, and inescapability. The seeds of what they’d create later was evident, a body of work that would pick up these very same thematic threads for years to come, with a level of candour that would set the bar for many writing songs aimed at the pop charts.

As mentioned however, this initial foray into a professional recording career didn’t initially take the two where they needed to go. After their debut failed to sell, Buckingham and Nicks returned to the drawing board; writing songs, cutting them, and shopping around the demos in between having to work straight jobs to pay the rent. After a taste of a big-time recording studio, that had to be discouraging.

But, all was not lost.

After Bob Welch left Fleetwood Mac in 1974, drummer and leader Mick Fleetwood  visited a studio where Buckingham Nicks producer Keith Olson played him this very track, revealing all of the extraordinary elements mentioned here. As luck would have it, Lindsey Buckingham would also be on the scene that day, recording demos. Fleetwood asked him to join Fleetwood Mac that very day. Buckingham accepted on the proviso that his musical partner (and girlfriend at the time) Stevie Nicks would also be a part of the package. Fleetwood accepted.

The invitation would completely transform Fleetwood Mac forever, redefining their sound away from their London-based blues-rock roots, and into a stylistically rejuvenated phase just in time for the soft rock boom centred around the West Coast of America. The rest is a history of drugs, marital breakdowns, inter-band romances, cultural ubiquity, and loads and loads of albums sold.

To date, the Buckingham Nicks record has never been issued on any other format beyond the original vinyl. But, both Buckingham and Nicks have certainly talked about seeing to a digital and CD re-issue as recently as last year, as well as (incredibly) touring the record with the original band. Yet, the 40th (!) anniversary of its initial release has come and gone.

Once again, it’s secret charms remain mostly undiscovered and unsupported just as they were when it was released.

To find out more about the sometimes tempestuous working and personal relationship between Lindsey Buckingham and Stevie Nicks, have a read of this piece on Rolling Stone magazine (but as usual with RS, don’t read the comments – they’ll make you dumber).

You can catch up to Stevie Nicks pretty easily since she’s on Twitter. Well, her people are.

Otherwise, sidle on down to lindseybuckingham.com for news about the titular musician, including his new record.

And in other Fleetwood Mac news, classic line-up member Christine McVie recently rejoined the band on their upcoming world tour this fall after a near two-decade departure, and after it was believed by all that she would never return. You can read her thoughts on her return to the fold here.