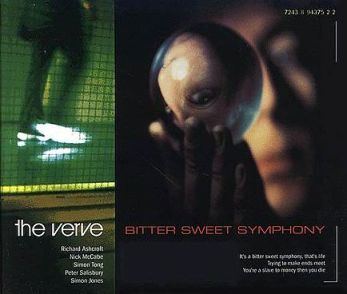 Listen to this track by post-Brit pop quintet from Wigan, The Verve. It’s “Bitter Sweet Symphony”, the first single from their high watermark 1997 album Urban Hymns. This was a landmark record that helped define an era.

This band formed at the end of the 1980s, building up steam into one of the most critically acclaimed bands in Britain by the end of ’90s. Vocalist and head writer Richard Ashcroft demonstrated his ability to come up with the goods on a songwriting level, while the rest of the band were able to fill out a big sound that brought that writing to life. Guitarist Nick McCabe in particular was instrumental in making the band what it was, returning after a period of estrangement after the completion of their previous record A Northern Soul.

This particular song was a top ten hit in the UK, top 20 in the United States, and with chart showings of similar caliber all over the world. By any measure, “Bitter Sweet Symphony” is a singular achievement. But, there was some controversy surrounding its creation and release.

The song is noted for it’s distinctive string motif, and Richard Ashcroft’s own impassioned vocals giving voice to late-Twentieth Century existential angst. But, it contained more than just those elements laid down live in the studio. A sample of an orchestrally rendered Rolling Stones song “The Last Time” in sessions that were overseen by then-Stones manager Andrew Loog Oldham was also added to the mix. Those earlier recordings were subsequently managed by ABKCO, the company Allen Klein set up to manage (and reap the profits from) the Stones’ catalog during their years on the Decca label.

The use of the sample on “Bitter Sweet Symphony” was cleared before the song was released. But, after the song hit the charts and was a smash success, suddenly the song was deemed to contain “too much” of the original source material. What a stunning coincidence that was. I wonder what would have happened if “Bitter Sweet Symphony” hadn’t been such a global success. I wonder if ABKCO would have demanded full publishing on a song that used a single sample in an otherwise original composition.

But to hell with all that.

This is a great song, no matter who reaps the benefits. It was perfect for its times, which were all about being on the edge of a new 21st Century, and wondering where life, and where history, was going. There was something comforting about this song in that context, even if the lyrics are kind of bleak in the end. This is an expansive song, big and sweeping, with the sound of it carrying a spark of hope for the future, even if those lyrics aren’t quite as convinced.

It is, of course, bittersweet.

The Verve broke up for a second time after this album was released. Solo careers ensued. But, the band would get back together for a follow-up in 2008 with Forth. They are currently “on holiday”.

But, there’s nothing stopping you from checking out Nick McCabe’s and Verve bassist Simon Jones’ new band Black Submarine.

[UPDATE: May 23, 2019: Restitution! Richard Ashcroft now holds royalties to the song again, largely due to working it out with Mick & Keith directly. Don’t you just love a happy ending?]