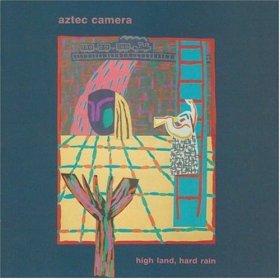 Listen to this track by Scottish pop sophisticate musical outfit Aztec Camera. It’s “Walk Out To Winter” as taken from the landmark 1983 debut  record High Land Hard Rain. The song was a single, scoring a top ten showing on the UK indie chart, with the album scoring top thirty on the UK album chart.

In the 1980s, this act would become grouped in with several musical outfits that would take the template of new wave and post punk, and mix it with more traditional pop threads; soft rock, latin music, light jazz, and R&B. But, that’s not to say that Aztec Camera was just another act in this vein.

Under principle songwriter and sole constant member Roddy Frame’s creative guidance, the results would be something that not many were able to achieve; a classic record, and with a single (this one) and other singles that would make for both an album band, and a singles band, too.

And what of this song? What does it mean to “walk out to winter” anyway?

The early 1980s was an uncertain time for everyone, as the Cold War seemed to ramp up in ways only seen since the early 1960s, putting the fear of mass destruction very firmly into focus. This was the first wave of political strategy from the Right that understood that fear was a useful tool to control the masses. We’ve certainly seen that strategy employed since.  It was certainly a frightening time, with the threat of nuclear annihilation a very real possibility as the superpowers postured.

What could be done about it?

That what this song always suggested to me; that the summer and fall of youth is over, and the winter of adulthood must begin, and in an era when things really were getting serious. In many ways this song is in the same vein as “My Generation”, although with a bit less bombast.  Instead, it feels like a call to action; “get your gear, get out of here”. Whether the winter here is just one of discontent, or one of the nuclear variety is beside the point. Maybe that question is just a way of railing against the idea of helplessness or voicelessness in the face of either. This is a song of defiance either way.

Of course the whole time, the melody and texture of this song is all about latin-flavoured funkiness, full of jazzy-jangly guitars and rhythmic effervescence that work against the sombre lyrical content – a classic post-punk gambit!

Roddy Frame would put out records under the Aztec Camera name for the next decade, working with a number of sessioners and name-producers, as well as developing a number of albums under his own name later on.

He’s still up to it today! Among other things, he’s making plans to celebrate the 30th anniversary of High Land Hard Rain in December. Learn about that, and about his work here.