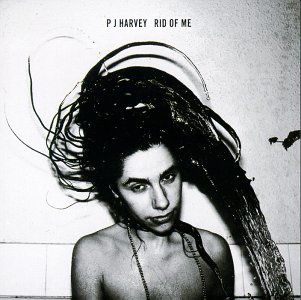 Listen to this track by serial Mercury Prize nominee and envelope-pushing singer-songwriter PJ Harvey. It’s “Rid of Me”, the title track  from her 1993 record Rid Of Me.

This song, and the record off of which it comes, forsaw a few trends that we would see in the ensuing years and decades; stripped down arrangements in a rock context, fusion of the blues with post-punk indie strains, and harshly autobiographical songwriting from the point of view of a woman, but without the wistfulness that is often associated with that dynamic. A good deal of this came from Harvey’s influences at the time. most notably Chicago blues, and specifically Howlin’ Wolf.

This ingredient is not unknown in the development of British rock music. This very same influence inspired a whole generation of bands, of course. But, Harvey’s approach to the blues wasn’t about hero worship or faithful renderings of existing recordings. She was able to do something that her contemporaries hadn’t really tried on the same scale; to include the blues, and to include herself as an author with an undeniable voice without being crowded out by it. That’s a tall order.

This is how I think she manages it.

First, she remembers that the blues is the root of all kinds of music, and that includes metal, which she certainly references here. Her use of quiet and loud is a Pixies reference (Steve Albini produced this, and the Pixies to boot of course…), also feeding a lot of the work of her contemporaries. But those harsh textures all stem from the kind of distortion originally found on Chicago blues recordings, and later greatly expanded upon in heavy metal, which is one of the blues’ many musical children, and one that was developed in her home country of course.

Second, Harvey recognizes the power of restraint and release. The arrangement here is spare, and it takes it’s time to get started, with a scratchy electric guitar riff, subtle percussion, and her own quiet voice that sort of duets with itself. The “lick my legs” backing vocal is like a dark inner voice, kind of like a singing id, that gives her performance real depth.

The whole dynamic is a  take on a blues convention; call-and-response. But, instead of this simply being an effective musical  device, it also provides a psychological component to it as well, as if we’re hearing several sides of the narrator’s voice, represented by the lead voice, backing voice, and even the instruments.

Another point she remembers to include here is a singular and defining element found in the blues; menace. This song is full of disturbing images marked by rage and violence. This is a break-up song, but not a sad one. It’s a frightening one, sort of coming off as a dark fantasy that someone who’s very angry and disturbed might think about saying to a former lover. But, it also includes a “feel like snapping my pistol in your face” element, so long laid down in rock history, and drawing from Muddy and Wolf without aping their sound.

This record was a big success for PJ Harvey, putting her on a path where she would continue to make an impact in terms of sales and critical acclaim in equal measure. As innovative as she continues to be, a skill she continues to display is her ability to push the envelope while also referencing what music fans have loved about rock music for generations.

PJ Harvey is an active musician today. You can find out more about her work at PJHarvey.net.