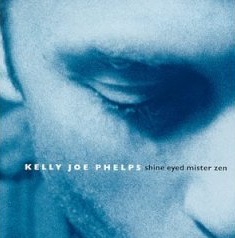 The song is a well-travelled British folk tune steeped in tragedy. There’s nothing like it for a great folk ballad from that tradition. And it doesn’t hurt for a blues tune, either. Because of Phelps’ command of the material, this rendition is potent, seeming to touch on both of those musical traditions all at once.

The song has its roots in Scotland, with the tale varying over the years as many, many folk musicians interpreted it over generations.  In some versions, the devil is a character, with the song also known as the more floridly titled “The Daemon Lover”. In earlier versions, the devil lures the house carpenter’s wife away from her home, and her child, with the promise of riches abroad. That’s a bit of a crossover into the world of the blues, too. The devil is a busy guy in many blues tunes from Skip James to Robert Johnson.

But In Phelps’ version the devil in his guise as a deal-cutting, saint-tempting figure of ultimate evil is nowhere in sight. There is a force more insidious at the heart of this version.

The tempter in this version of the story is an ex-boyfriend of the House Carpenter’s wife. He’s not an agent of evil exactly, in the traditional diabolical sense. But, he sure does know to use guilt to get what he wants, which is the more subtle form of evil as it’s perpetrated by people everyday in one form or another. Using a sense of obligation to manipulate another is the real devil in this version of the events.

In this story, a man comes back from his travels abroad to win back his ex, who’s married someone else – the titular House Carpenter.  He proclaims that “I could have married the King’s daughter, dear. I have forsaken her crowns of gold, and all for the love of thee”. He was saving himself for his ex, you see. How can she be so cold as to refuse him in his offer to run away with him despite a husband and baby, seeing as he sacrificed so much for her?

In some ways, this reflects a theme that a lot of folk tunes raise, which is about the plight of women under the influence of selfish, narcissistic men. Who needs the devil when you’re up against that? And of course, this tale doesn’t end well, with another stalwart element in British folk music – a shipwreck. When you live on a big island, it stands to reason.

Phelps’ ability to interpret old songs and inject emotional gravity in its delivery is well-known by now, particularly by those who’ve seen him play live.  It’s his portrayal of the characters in they move closer and closer to their doom that really sells this, along with his mastery of the slide of course. It’s also his way of bridging the streams of many folk traditions that makes this version of a very old song come to life, reminding us that human frailty and the cruel nature of fate knows no one genre.

Find out more about Kelly Joe Phelps at kellyjoephelps.net.