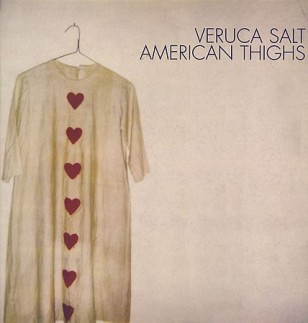 Listen to this track by Chicagoan, Roald Dahl-monikered rock ‘n’ roll band Veruca Salt. It’s their hit song “Seether”, released as a single at the end of 1994 as a double A-side with “All Hail Me”, and eventually featured on their debut album American Thighs, scoring them a top ten showing on Billboard’s Modern Rock chart. The song also made a top ten showing in Britain too on John Peel’s Festive Fifty that year.

Veruca Salt was one band whose sound obviously drew from a different musical well than the grunge-oriented rock music made earlier in the decade.  They drew from some of the same sources, but also from the power-pop sound of the ’60s, too. This song proved to be a big hit for them in that musical vein, mostly because even if they stood apart from the crowd, there were a lot of thematic touch points that aligned them with that early-to-mid ’90s “alternative” zeitgeist.

One such theme of that era was that of rage.

This was becoming very mainstream, and in direct contrast to the decade that preceded it, when “raging” bands and their songs were on the fringes. Another important element here is who it was who was actually doing the raging. Women’s songwriting and voices in front of rock bands was not the novelty it had perhaps been in the ’80s on this score.

I hate to frame “women songwriters in rock bands” into some kind of genre of its own. It’s a ridiculous notion. But, in the 1990s, this was hard not to notice as a trend, particularly among American rock bands. Veruca Salt was one very notable example along with Hole, The Breeders, L7, Sleater Kinney and others.

So how are gender and rage connected here in this song, exactly?

Well, to start with, one valid answer to that question is that it doesn’t have anything to do with gender at all. This was a song about someone dealing with a primal urge to violence, or at least to an anti-social outburst of some sort. It’s about an individual dealing with the demands of propriety balanced against a reflex to lash out in spite of it.

“Seether” can certainly be digested using this interpretative lens, and still be a valid statement about rage. After all, we all struggle with managing our anger at times, right?  It really doesn’t matter who’s singing this song, or who wrote it.  Besides the fact that it rocks like a mofo, that it’s tempered with a huge sense of fun to make sure it isn’t dull, and the playing on it is great, this is probably why it was a hit. With this song, we all know the score, thematically speaking.

Yet, the 1990s was also a time when post-modernist thinking was very much in vogue, especially in university where I was at the time. The idea is that nothing we express is without a sociocultural context and that everything is defined by its presentation and its construction. This was as inescapable for many listeners of my generation as it was to notice that more and more women were fronting rock bands in a historically male-dominated industry and profession than ever before.

The fact that we’re hearing a woman’s voice singing this song makes it intrinsically about the experience of being a woman in general, just because it is a woman singing it, and despite the intentions of the writer. That’s the theory, anyway.

It does sound kind of strident and heavy-handed when you’re talking about a three-minute pop song, doesn’t it?

But, whether or not that model of interpretation is accurate, this much I do know.  It was difficult for me at the time this song came out to ignore how pissed off many of my women friends were at having to be nice all the time, and to not be thought of as a crazy, scary bitch by showing everyone how pissed off they actually were.

After all, aggression and violence as expressed by guys is practically celebrated and encouraged in our culture. That’s not true for women even today, over twenty years later. There are different standards attached to anger and aggression across gender lines. A guy who takes no shit off anyone is a hero. And a woman who takes no shit off anyone is just a ball-breaker, right?

To me, this song was and still is a powerful statement on the mechanics of that disparity.  It was one of the pieces of the puzzle for me to get me thinking about anger, the impulse to fight rather than submit, and about the pressure on women in particular to not rock the social and political boat.

Veruca Salt followed up this song and American Thighs with Eight Arms To Hold You (spot the Beatles reference) in 1997. On that record, and on their song “Volcano Girls”, they sang the line “The Seether’s Louise” (spot the other Beatles reference).  And after some years of membership shuffles, they’re back again with their original line-up; Nina Gordon, Louise Post, Jim Shapiro (also a member of Hushdrops, kids!), and Steve Lack!

Investigate the Veruca Salt official Facebook page for communications of all kinds.