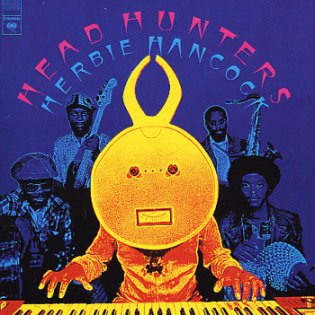 That record would spin the heads of many who’d first heard it, perhaps not being able to immediately figure out whether or not it was a jazz record. Many of these people would be the critics. Well, it certainly is a jazz record. But, it also carries with it influences that stood apart from the traditions of the jazz world at the time too; Stevie Wonder, Sly Stone, and the funk genre in general, which is in turn very much influenced by jazz. Talk about spinning heads!

The barriers between the musical forms expressed here had always been fairly permeable. But, as jazz expanded its borders by the end of the ’60s, the definition of jazz as a musical form became harder to ascertain. It had shifted, and morphed, having taken on new influences, as it had done since it was first recorded.

In the middle of all of that, this record was a big seller, standing as a sign of the musical times where the evolution of jazz was concerned.  And it would provide an avenue that would open things up for Hancock, and for other musicians down the road.

This piece is characterized by piles of the latest synthesizers of the time, and with tons of bottom. Along with Fender Rhodes electric piano, clavinet, and synthesizer, Hancock plays that wondrous bassline on an ARP Odyssey, while electric bassist Paul Jackson shadows him. There’s nothing like a tenacious bassline to hold one’s attention, as anyone who’s opinion matters will tell you.

The  groove is held togther with the help of bona fide funky drummer Harvey Mason, and percussionist Bill Summers. Offsetting all of the keyboardry, and drums-and-bass interlock is reed player Bennie Maupin, who’s tart tenor saxophone adds a bit of sass, and his flute a bit of breeziness, to offset the electronics, undescoring the contrast between the organic and the synthestic.

Hancock had worked with synthesist Patrick Gleeson on an earlier recording, Crossings. Gleeson had been recognized as something of a pioneer himself, with an interest in the burgeoning electronic music scene in Europe. It was he who introduced Hancock to the possibilities of synthesizers in jazz, being one of the first to utilize the new technology. Mixed with Hancock’s interest in funk and in rock music too, Head Hunters was born, with “Chameleon” as its centerpiece.

At the time, it was these different textures, instrumentation, and approaches to arrangement and style that divided opinion on what the record represented. But, with a hand in so many musical provinces, it opened doors. It blurred lines between R&B, jazz, American music, European music, popular music, and music designed to appeal to aficionados.

And as mentioned, it opened the way for Hancock to explore other forms into the 1980s, notably with electro. This was a long way from his days as a hard bop pianist mentored by Donald Byrd in the early 1960s. But, that’s what innovators do; they change their styles based on new possibilities, and at the same time, they expand our own definitions of the music as listeners.

Herbie Hancock is an active musician today, still pushing the boundaries, and winning Grammies by playing acoustic-based jazz, and electrified jazz-funk and electro in equal measure. You can catch up to him at HerbieHancock.com.

And if you want to see something really cool, here’s Herbie Hancock’s Sesame Street Synth demo in the 1980s, also featuring future Fresh Prince of Bel Air actress, and pop star Tatiana Ali when she was a little kid!