The band is comprised of four musicians who’d made their name in other bands; Fela Kuti sideman Tony Allen on drums, Verve guitarist Simon Tong, Clash bassist Paul Simonon, and Damon Albarn of Blur  and Gorillaz singing and playing keyboards. Danger Mouse is sort of a fifth member in the producer’s chair helping to create the woozy psychedelia you’re hearing on this cut. Albarn also serves as creative head of the band, with this song being one he’d tinkered with many years before.

When the band debuted, they technically had no name. It was the record that was to be called The Good The Bad & the Queen, not the group. But, things being what they were, chart compilers christened them appropriately. This lack of convention characterized the whole project, designed to create some distance from the formidable backgrounds of each member, and producing something new out of the effort.

But, on this song, the past wasn’t that far out of mind.

As the lyrics suggest, the song really was written “years ago somewhere on the Goldhawk Road” donated to Marianne Faithfull who recorded it in another form, with other lyrics; “Last Song“. It had indeed gone, “passed along to people I hardly knew.” And, not to belabour the point, but it “stayed with me and found me out and above all things I’ve learnt”.

So, as it has been suggested elsewhere, this really is a song about a song. It was written during Albarn’s height as a Britpop poster boy writing about England and London even then, with the resulting song having returned to an older and more experienced version of himself after that era has passed. 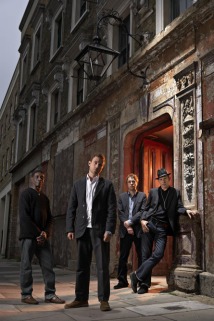 Therefore, it’s also about someone reflecting on their own past, of a more innocent time before wars and tidal waves (literal, and probably figurative too), when they were younger and of a mind to give valuable things away, perhaps more so than they are in the present. It’s also about how the future can catch up to you quickly, that one day you look up and the world has changed. There are things that everyone needs to hold on to in order to stay true to themselves when that happens.

Each member of the band could most likely relate to that, having enjoyed success in other times, in other eras, contexts, and places. But, you don’t have to have been a member of a rock band to appreciate the value of being anchored when the winds of change start to bluster.

The green fields in this song are those that once thrived where a city now stands; a city much beloved, with dreams of all kinds under its surface, and a great many memories too.

One thought on “The Good,The Bad & The Queen Play “Green Fields””