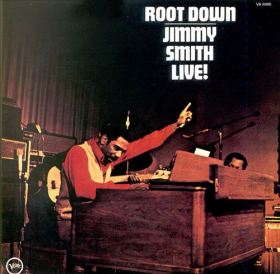 Listen to this track by Hammond B3 organ kingpin and soul jazz practitioner Jimmy Smith. It’s “Root Down (And Get It)” as taken from his 1972 live album Root Down Jimmy Smith Live. The record was recorded live in Los Angeles in February of that year. You can hear the clinking of the glasses which serve as a kind of unofficial percussion section as the patrons listen to the groove as it unfolds. And boy, does it ever.

Like Wes Montgomery with whom Smith partnered on many occasions, Smith was interested in the pop music side of the soul jazz spectrum. But also like Montgomery, Smith was a formidable improvisationalist even if some of his sides are viewed as a bit lightweight.

Yet, here on this cut, it’s the funk that really shines through. And it serves somewhat as a beacon of light for the music that would emerge in ensuing decades, too.

The ’60s was a time when connections were being made more blatantly between jazz, the blues, soul music, and gospel music. Those streams had always intermingled. But Jimmy Smith’s use of the organ really ties the music to the church in a way that most hard bop does not.

Smith had been on the scene as a recording artist starting on the Blue Note label in 1956. He’d started as a pianist, but discovered the Hammond B3 organ as an instrument with a range of sounds that the piano didn’t offer him. As one of the earliest soul jazz organ players to model that sound for others, Smith made his mark in the ’60s as a very influential jazz organist, although he intially built his approach on the work that Wild Bill Davis laid down as another pioneer of the B3 in a jazz context in the ’50s, and even earlier.

By the late ’60s in particular, the links between jazz and rock music were also becoming more and more clear, of course. By then, Jimmy Smith’s sound had made an impact on many rock players, and the influence flowed back the other way, too. You can certainly hear it here on this track, a pure bluesy groove that incorporates jazz improvisation. But, it also relies on the interconnectedness between players characterized by rock music, and funk. The result is a sound that’s certainly tied to an era. But, in the decades to follow, it would prove to have legs beyond that era.

Apart from creating grooves that can certainly be appreciated on their own, they also provided the basis for the 1994 track “Root Down” by the Beastie Boys. Smith would also be somewhat of a figurehead for Acid Jazz, with hip hop textures coming out on the other side of the grooves that fed it, and back to where they began again.

Active into the 21st century, Jimmy Smith continued to play gigs and put out his final album in 2001 – Dot Com Blues on which he was joined by peers as well as followers. He died in 2005.

You  can learn more at the Jimmy Smith bio on All Music.

One thought on “Jimmy Smith Plays “Root Down (And Get It)””