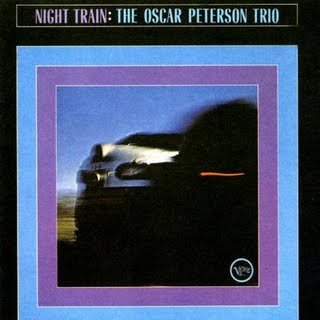 When the song was recorded for Peterson’s record, it was aimed at the charts specifically by producer, and former Verve owner Norman Grantz. That’s why it doesn’t stretch out as much as some jazz tunes of the era. It’s the length of pop song that would get play on early ’60s radio, perhaps like a song like “Take Five” by Dave Brubeck had done. And it certainly was a big success for Oscar Peterson, being one of the most recognized records he’d put out during a long and celebrated career.

But, this tune and the record it comes off of holds a special place in my heart during my teenage discovery of jazz. And I know I’m not the only one.

“Night Train” has been recorded by many since it emerged out of a jam by a small band around none other than Duke Ellington, including tenor saxophonist Jimmy Forrest, who recorded the earliest version of the song in 1952, and scoring some play on the R&B charts. By the time Peterson recorded it with his jazz trio, it had been recorded even more famously by James Brown & The Famous Flames, among others. So, it serves as something of a stylistic bridge between the blues, R&B, and jazz proper. It’s since become something of a standard across that spectrum.

When searching for cool jazz records in an age before the Internet, I found a beat-up copy of Night Train in the local used record shop, Cactus Records at the bottom of Kerr Street in Oakville, the town where I grew up. Bringing it home and putting it on the turntable offered up a revelation in jazz listening. The title track struck me as an impossibly cool thing of beauty, with Peterson’s effortlessly bluesy and langourous licks, particularly that rolling glissando that makes this tune such a standout for so many, completely selling me on the power of simple-is-best playing.

Among other things, it convinced me that the rumours about jazz being an overtly complex, inaccesible form was too simplistic to be true. Basically, this is the blues; the same roots as rock music, and pop. It was an important step in connecting the musical dots, transcending genres, and entering into the world of just pure music.

Years later, I’d take my English degree at York University during Oscar Peterson’s tenure as Chancelor. I came this close to having his name on my degree, and shaking his hand at graduation, maybe the same hand that performed that cool glissando riff that had turned my head years before.

Oscar Peterson died in 2007. But, his stature as a jazz pianist, composer, singer, and educator remains undiminished. Check out OscarPeterson.com to learn more about him.