Listen to this track by Athens Georgia ’60s hairdo sporting new wave quintet The B-52’s. It’s “Rock Lobster”, a 1979 hit record as taken from their self-titled debut album the B-52’s.  This is the longer version of a record that had been released earlier in a shorter form. The song established their sound early on as an amalgam of ’60s surf music, B-Movie aethetics, and of course a DIY spirit that played right into punk and new wave. Their timing was perfect.

Serving as their first single, the song was an instant pop hit, despite the fact there was nothing to prepare audiences for it. Of course too, the sound of the record goes against the system too, full of surf guitar, tinkly keyboards, and call and response backing vocals that aren’t really backing vocals, but more like shared leads.This is thanks to Kate Pierson (who also plays Farfisa organ) and Cindy Wilson, who come off as post-punk Shangra-Las.

It became a signature hit for the band along the way. Even in an era when weird, cool records were more common in the mainstream than perhaps they are today, it’s popularity was widespread, played at every school dance for years after its release.

Where did this song come from?

It was the singular weirdness of the record that made it so appealing. Listen to Fred Schneider’s voice on this, only one  of the textures that would make it notable as a record with no real precedent on the pop charts. He’s less a lead singer and more like a ringmaster. The whole package seemed to be bucking the system of slick, calculated lyric writing, melodic singing, and by-numbers chord progressions and instrumentation.

Another thing about this version of the song is its sheer length, with unexpected instrumental passages led by guitarist Ricky Wilson, along with vocal whoops and effects (or someone’s impression of a narwhal …), that reminded John Lennon of his wife’s work while hearing the song in a club in Bermuda, inspiring him to “get out the old axe and wake the wife up.” So, this song is instrumental in inspiring a Beatle out of retirement. C’mon. 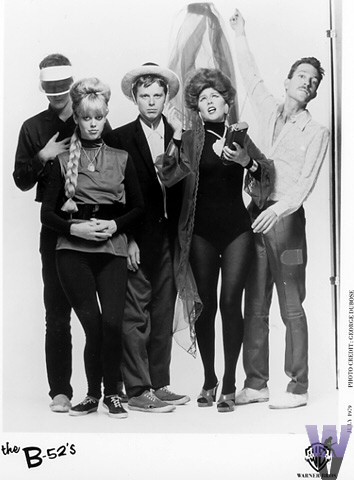 But that aside, this song was just always a fun one to dance to with your friends. It was a hugely communal experience, again, played at every school dance I ever went to by the early ’80s. And everyone knew the moves during the “DOWN! DOWN!” part. Fantastic. It brings me back to my childhood, which is what it perhaps did for the people who wrote and performed it, full as it is of early ’60s beach blanket bingo imagery, and storybook sea creatures. And now my daughter, now seven, loves this song thanks to Just Dance on the Wii.

The band would have a number of hits after this, including another song that rivals it for signature tune status in “Love Shack”, which is also a song designed to be enjoyed communally. But, this is the one that set them on the path to finding one of the unique sounds in pop music history.

The B-52’s are an active band today, currently on a tour with the Go-Go’s (another apostrophe-totin’ new wave band of note). check out the official B-52’s site.