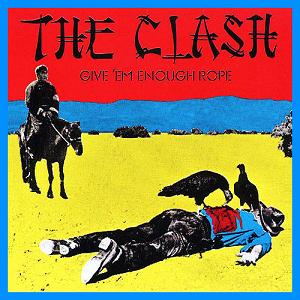 Listen to this track by one-time Only Band That Mattered, the one and only The Clash. It’s “Safe European Home” as taken from the band’s second record Give ‘Em Enough Rope, released in November of 1978.  The song recounts the return of an English tourist from “the land of Bluebeat“, that being Jamaica, and the change in perspective that the trip has created.

The whole thing is delivered by what is now known as the classic Clash line-up; Joe Strummer singing and playing rhythm guitar, Mick Jones singing and playing lead guitar, Paul Simonon on bass, and joining them for the first time, Topper Headon on drums. This is also the classic punk rock sound on which they built their reputation, although it’s filtered through the growing expectations of CBS, and their producer Sandy Pearlman. The sessions were strained, by some accounts. Yet, The Clash had a voice like no other band at the time, which shows through gloriously here.

They would expand their sound greatly in short order beyond this bedrock set of musical aesthetics established here. But, the core sound of the Clash is solidified here in any case; call and response oriented vocal dynamics, bluntly effective guitarwork, and an impressive, almost R&B feel between bassist Simonon and drummer Headon.

This song also touches on a classic Clash theme, specifically that of authenticity, although in a way that works against many of their other songs that deal with that same theme.

“Safe European Home” provides dimension to other tracks on the record, many of which touch on the issue of global violence, just as their first album dealt with violence or the threat of it at home. Just look at the cover of the record! The Clash would continue to position themselves as a band who pulled no punches.

And on the songs themselves,  images of guns and wars are positioned as props for a series of tough-talking tunes that may make it sound like lyrical posturing in places. But, that’s only what’s happening on the surface. “Safe European Home” opens the album, and serves as a wake-up song to wider issues at work globally at the time, that even myth-making bands like the Clash needed to come to terms with. Strummer and Jones made a trip to Jamaica months after the Clash’s debut came out, during a time of political instability in that country.

While it would later become fashionable for groups to record in the idyllic Caribbean island of Nassau, in November 1977 Joe Strummer and Mick Jones flew to volatile Jamaica to find inspiration for songs for a second album. The home of ska and reggae was an extremely dangerous place, riven by political violence, and Joe and Mick spent most of the time in their hotel room.

Due to an ideological changeover in Jamaica during the late ’70s, gunplay and crime were matters of course. It was a place of great distrust and anger where first-world political and economic forces were concerned, and therefore a place where “every white face is an invitation to robbery”. Perhaps for two middle-class white British men in their mid-twenties, this inverted the way that many Europeans perceived racial dynamics when at home, finding themselves targeted because of their skin colour just as many Jamaican immigrants were targeted because of the same in Britain. The root of this change in perception certainly fed this song.

But, this shift in perspective is also a bucket of cold water to the hot-headed, idealistic white punk invested in the myth to be found in another song of theirs “White Man In the Hammersmith Palais”, recorded around the same time and released as a single. This is a song that trades on the glamourization of roots rebel life in Jamaica, and the inauthenticity of that life in Britain by comparison. But “Safe European Home” is a tale of coming home from that place not feeling quite so tough as when the trip to a mythical land began, and where the real face of a culture, and political and economic realities are revealed.

To me, this makes “Safe European Home” something of a song about growing up, being shocked into reality, and admitting to it. Maybe this could be looked at as a song that’s about appreciating one’s own lot in life at home. But, for me, it’s also about the plight of others in other places that are not so safe, and about what they are exposed to everyday that those in safe homes and in a reasonably safe countries don’t have to think about.  As such, it approaches the theme of authenticity in a new way, with a new appreciation of a culture that provides inspiration of a different kind.

The Clash broke up in 1986. But, they are still hailed as a defining band for multiple generations of players and fans. Learn more about the Clash at the Clash.com.