Here’s a clip of left-leaning young soul rebels and bona fide pop collective The Style Council. It’s “Shout To The Top”, a single which appeared on the UK album Our Favourite Shop, and on the US album Internationalists, both released in their respective markets in 1985. The single appeared in October of 1984 on the British charts where it reached a respectable top ten showing. 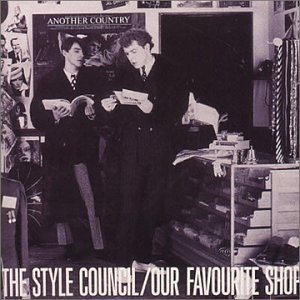 This was during a time when social and economic issues were particularly polarized in Britain, and in North America as well, which may explain the political undercurrents in this song about being at the end of one’s rope, with nothing left to do but rage against the machine, so to speak. The Style Council helped to pioneer this approach to writing politically informed material as established on their earlier album Café Bleu aka My Ever Changing Moods as it was known in North America. The result was the creation of a sort of pop music political manifesto. Our Favourite Shop puts the band into their sharpest focus.

This artistic fluidity of the band was extensive, mixing Northern soul, jazz, mod-rock, and even early hip-hop sounds. Thematically speaking, they’d aim pretty high too, often bordering on the polemical, and sometimes into downright pretension. This would go south for them later in the decade when they strayed a bit too far, and when popularity and sales began to wane. But, in the mid-80s, leader Paul Weller, who had gained some similar thematic traction when he fronted The Jam, demonstrated his full array of pop smarts in this new musical milieu, along with the political content to be found in his lyrics to go along with them.

That’s why this song just zings. This is a bright, bouncy song about not taking it anymore, a shining soul-pop gem about being tired of being oppressed. You might wonder how it’s possible to get a top ten showing on the charts while making such strident statements about society, even if it is wrapped in a stunning pop sheen. But, this was the ’80s, friends!

Does that mean that audiences were more receptive to political messages in their pop at the time? Or did it mean that they weren’t listening very carefully? Was there another reason?

In some ways, The Style Council was kind of an anti-pop group. This had nothing to do with the music, which is as pop as pop gets, with Weller’s soul-influenced voice, and keyboardist Mick Talbot’s effervescent playing leading the charge. But, you could say that this was as earnest as a British group would ever get around the issues of racism, economic suppression of the working classes by government, and an embrace of aesthetics and lifestyles that weren’t exactly in line with ’80s excess. They were teetotalling vegetarians with sweaters around their necks!

But, in some ways they certainly were of their time. As listeners in the 1980s, we expected pop stars to be above us in a way that isn’t quite true today. In the 21st century, there’s a certain elevation of a pop star in terms of celebrity. And these days there is a certain place in our hearts for pop stars who are “regular guys”; no costumes, no manifestos, and no ideas above their station with respect to their role in society. Like our politicians, we now want to feel like we could have a beer with our favourite pop stars, or songwriters.

In the 1980s, I think it was a lot different on this front. We wanted pop stars to say things that we hadn’t thought of saying ourselves, or couldn’t say, and at a time that demanded they be said. We didn’t even think about having a beer with them. They should be too busy writing about the state of the world, some profound thought on the human experience for that. Or, they should make their work sound that way, at least. This was elevation of a different sort. I think that many songwriters of the era felt a certain sense of responsibility to follow through with this, simply as a function of their chosen profession. And they had an audience ready to listen.

This is, I believe, what this song and other songs to follow like “Walls Come Tumbling Down” represents. This is a protest song, one of the last of its kind in the mainstream as it once was, just before political songs became a seemingly unpalatable presence on the radio. When Weller, and co-vocalist D.C Lee sing “we’re going to shout it to the top” about the corrosive influence of right wing agendas and the attacks on the social safety net, they weren’t just reciting lyrics. They were giving voice to the feelings and thoughts of people out there at the time.

From Paul Weller’s site on the subject of the political, economic, and social climate in Britain in the 1980s, and his motivation in writing a song like “Shout To The Top”:

“It wasn’t a time to be non partisan,” reflects Paul. “It was too serious a time, too extreme. I wasn’t waving the Labour party flag but the socialist red flag that’s for sure. In The Jam I didn’t want to be a part of any movement. But this was different. Thatcher got into power in 1979, and from the Falklands war onwards, that was her wielding her power, the trade unions were being worn down, we had the miners strike, there was mass unemployment, there were all these issues, you had to care and if you didn’t you had your head in the sand or didn’t give a fuck about anyone but yourself. You couldn’t sit on the fence. It was very black and white then. Thatcher was a tyrant, a dictator.” [Read the whole article]

I don’t think that anyone thought that a single record could change any of this. But it added to an offering of music at the time that knew it had an audience directly affected by it all. That audience was certainly a factor – to be willing to listen, and to buy the records. But, ultimately, I think these issues really mattered to Paul Weller as a writer, enough to take a lot of chances stylistically speaking. Who else was singing red pop-soul in 1985? And it was all in an effort to present relevant sentiments of the era the way he felt it would have the most impact at the time; on the charts where everyone could hear them.

It wouldn’t work today, perhaps. I think that even if many of the things happening today are as bad, or even worse than they were in Thatcher’s Britain, or Reagan’s America, the mainstream itself is not what it once was, either by natural evolution, or maybe by design.

And maybe we as listeners aren’t the same, either.

Paul Weller is an active musician today. Make sure and visit Paulweller.com to learn more about him.

Mick Talbot has continues to be a stalwart keyboardist, as a part of Dexy’s Midnight Runners (now just Dexy’s), a band he’d been a part of before his tenure in the Style Council.

4 thoughts on “The Style Council Play “Shout To The Top””