Listen to this track by evocative and melodious Los Angeles-based folk-rock with indie rock flourishes outfit Family of the Year. It’s their radio hit “Hero” as taken from  their 2012 album Loma Vista.

“Hero” is the best thing on the radio that I’ve heard in some time. It’s an instantly accessible, and somehow familiar melody of the type that you think you’ve heard before, but haven’t. That’s pretty rare too. Maybe this is the type of tune they’re going to use to play out the end of an episode of some TV show with some soulful teenage lead. Maybe they already have.

This song carries a poignancy of its own.

The band is the result of evolution, and migration too. The evolution part is covered by the fact that this band is in part made up of members of Unbusted, a Boston-based band of which two thirds were made up of brothers Joseph Keefe (vocals and guitar) and Sebastian Keefe (drums). The band cut their teeth on tours with Doves, The Walkmen, Juliana Hatfield, and Cheap Trick. Unbusted got a song onto the Farrelly Brothers Stuck On You movie soundtrack. But, the raw rock sound of Unbusted was only one aspect of the brothers’ musical ambition.

The migration part is the fact that the brothers both were born and raised in Wales, making their way to Martha’s Vinyard, then to Boston, and finally to Los Angeles. It’s here that they embraced the mythical, mystical California sound of close harmonies, and wistful folk-rock.

Of course, it helped that members James Buckey (guitar) and Christina Schroeter (keyboards, vocals) made migrations of their own, of varying distances of course – Jacksonville, Florida and Orange County, California respectively. Since Family of the Year formed, they’ve toured with Edward Sharpe & The Magnetic Zeros, Ben Folds, Gomez, and many others. 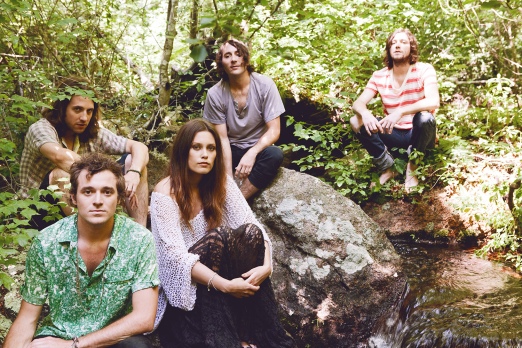 “Hero” appears on their second full length release Loma Vista, their first on a major label. But intially, the song appeared on the 2010 EP Through the Trees. It’s a melancholic tune that pulls you right into it, with minor falls and major lifts aplenty, but with melodic lines that are designed for the listener to ride along with. And again – it feels like one of those songs that’s been around a lot longer than it actually has. The first time I heard it on the radio, I began to sing along to it immediately. It welcomes that impulse in a way that a lot of radio tunes don’t in that same immediate sort of way.

This is perhaps evidence of how connected it is with a certain school of songwriting, that begins with a strong melody and expands from its heart outward. And maybe it has another advantage too, with members of a band that come from the outside of the California folk-rock traditions, yet with the cultural threads from various sources that helped to feed it in the first place; the British Isles, and the American South, all with musical strains of their own to offer.

If you want to find out more about the album, or want to catch Family of the Year live somewhere, then you’d better investigate the Family of The Year official site post-haste.

[Update April 24, 2015: Having just seen the film Boyhood wherein this song features prominently in the last few scenes, I have come to fall in love with this song all over again. It frames the themes of the film perfectly, with the underlying idea of growing up to be who one wants to be, not repeating the same mistakes of those who raised you, and not buying into the often very oppressive system that forced their hands. Sometimes, songs and films dovetail so well, it’s difficult to know where one ends and the other begins. That was certainly proven in this case.]