Listen to this track by concept-wielding orchestral-folk auteur and major Christmas music fan Sufjan Stevens. It’s “I Saw Three Ships”, an eminently seaworthy Christmas carol as it is featured on his 2006 Songs For Christmas boxset.

The song comes from a long-running project from Stevens, a prolific recording artist used to putting together home recordings in short order. Initially, the recordings were meant as gifts to friends and family. Hey, it was Christmas! But, eventually the songs recorded for the series of EPs over the course of five years that made up this set of recordings began to coalesce into a bona fide project fit for a release meant for a wider audience – us.

Walking through the mall while Christmas shopping this year, you might think that Christmas music is a fairly limited subject for a whole boxset from a guy better known for his concept albums of original material that comes from unique angles. But, there’s tons of Christmas music out there that isn’t as well known as some of the songs you’ve heard in the mall lately. And Stevens decided to write some original songs to boot, arguably matching the spirit of those traditional tunes. This added up to 42 tracks of Christmas cheer!

The Songs For Christmas project spans five volumes, recorded from 2001 until 2006. The box in which the material was collected includes stories, posters, stickers, and comics. It’s a Christmas morning all in one box. And while he was at it, Stevens went and recorded one of my favourite Christmas tunes of all time, and one of my favourite versions of it, too.

So, just what makes this version so compelling, exactly?

First, I think the reason I love this Christmas carol so much in general is because it’s a kind of hyper-Christmas Story, with meeting Mary and Baby Jesus by ship, coming into some sumptuous port while the morning sun brightens up the world rather than a pokey little stable in the dead of night. It’s a giant-sized, Technicolor, big-budget, blockbuster, letterboxed, 70mm,  3-D, cast of thousands Christmas carol. This could be why Jon Anderson of Yes recorded his wacky version of “I Saw Three Ships”, and even named an album after it in the 1980s. It’s a prog-rock Christmas tune. 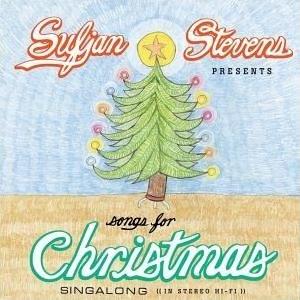 But, Sufjan Stevens takes a different musical approach. This version is full of banjos, ukeleles, oboes, and of course sleigh bells. This is like the community theater troupe version of the song. It’s down-scaled, and down-to-earth. You can picture this being performed down at a local community center in some small town, with scenery painted by the local public school kids, and maybe featuring a few of them on stage with the musicians, playing the roles of sheep, donkeys, and shepherds.

Like there often are in these kinds of productions, you can see the seams in a lot of places. But, after the performance, you just know that there’s hot chocolate and gingerbread cookies being served in the reception area. And after it’s over, as you walk back home through the snow thinking about how much you enjoyed it, any imperfections are completely forgotten, or just thought of as being unimportant. Like Christmas itself, there’s just something of the magic of childhood about this version of the song, and Songs For Christmas in general. It’s just sweet.

Even if “I Saw Three Ships” is a giant-sized Christmas story, it also works on this Bedford Falls small-town scale, too. This says something about Stevens as a recording artist and arranger. But, it says something about the song too. Once again, we’re reminded that the Christmas music we know, love, and sometimes take for granted, are songs. We realize too that they’re songs that continue to make impact on us as the years go by in the best possible way, still appealing to the child version of ourselves no matter how old we are.

Sufjan Stevens is an active recording artist today. Learn more about him at Sufjan.com

[Editor’s Note: tomorrow on December 18, this here blog will be 5 years old! That’s half a decade! Happy birthday to us!]