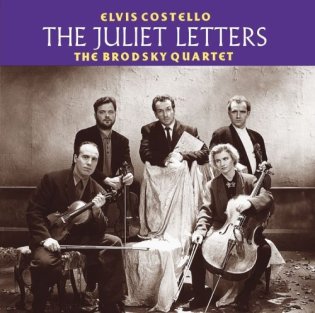 Listen to this track by stylistically exploratory singer-songwriter Elvis Costello, and lyrical chamber music avatars The Brodsky Quartet. It’s “Jacksons, Monk and Rowe” as taken from the 1993 collaborative album The Juliet Letters.

In many ways, it’s amazing that this record was put out on a major label. The early ’90s was a time when the formatting of music was becoming more and more rigid for established artists signed to the majors. Elvis Costello who had been signed to Warner Brothers for a few years by this time seemed to be moving in the completely opposite direction to this trend. From 1989’s Spike, and 1991’s Mighty Like A Rose, he’d created some pretty angular pop music, with equally idiosyncratic production that is not to everyone’s taste. This was especially true for those expecting another This Year’s Model.

So, how did a rock ‘n’ roll songwriter, and a straight-ahead classical string quartet to get together and make an album that was neither a pop record, nor a classical one? And how does this particular song shine a light on the core values found in both musical streams?

It started with Costello’s musical curiosity. Fascinated with all kinds of musical forms, Costello attended a concert series of Shostakovich’s string quartets, performed by the Brodsky Quartet in 1989. He would continue to attend their concerts over the next few years.

Eventually, the quartet and Costello got together to discuss a collaboration, and to engage in some informal sessions by November of 1991. The central idea for the project sprang from Costello’s then-wife Cait O’Riordan, reading a clip in the newspaper about an academic based in Verona, answering letters addressed to Juliet, of Shakespeare’s Romeo & Juliet fame. Romance and tragedy; now, there’s a couple of themes that are familiar in both classical and pop music. It provided the inspiration needed to kick off the project.

But, despite the forms and themes being familar, the musical fusion certainly wasn’t. Or, at least not in like this. Each party was out of their respective comfort zones. Costello was only just beginning to try his hand at formal musical notation at the time, having been previously unable to write music down for other musicians to read in formal charts. Conversely, the short “song” based format was a very unfamiliar one for the Brodskys, who were more used to musical forms that don’t rely on the immediacy of pop music, not to mention lyric-writing. But, everyone kept an open mind.

Costello writes in his liner notes to the record:

We looked at the characteristics of the music that we loved and admired. The Quartet played pieces, I played songs, sometimes we listened to records. Naturally, some of the music introduced was unfamiliar. But, this only added to the possibilities. Soon, our ideas began to emerge … This is no more my stab at “classical music” than it is The Brodsky Quartet’s first rock ‘n’ roll album. It does however employ the music which we believe touches whichever part of the being that you care to mention. It also conforms to, and occasionally upsets, the structures found in our respective disciplines and indiscipline! (taken from Elvis Costello The Brodsky Quartet The Juliet Letters re-issue on Demon/Warner Brothers).

To my ears, this balance between discipline and indiscipline is perfectly captured in “Jacksons, Monk and Rowe”, a tale actually written not by known wordsmith Costello, but rather by Brodsky members and siblings Michael and Jacqueline Thomas,  violinist and cellist respectively. Costello acted as editor.  The song touches on imagery that contrasts the freedom and innocence of childhood, balanced against the austerity and responsibility of adulthood, embodied in the brass nameplate of the titular firm of solicitors.

In some ways, this contrast can be interpreted as the split between “serious” classical music, and the adolescent sizzle of pop music. Yet, even with this split, the music undermines the division, with a pop-friendly melody, complete with a middle-eight section, that is contrasted with the delicacy and precision of the Quartet. By the end, it becomes apparent that the innocence and experience in the song isn’t linear. Rather, they flow in and out of each other just as the two strains of pop and classical musics do. “Jacksons, Monk and Rowe” is a microcosm of the whole record in that way, which is perhaps why it was chosen as a single.

Being an unprecedented release with virtually no common musical reference points,  the album split rooms critically speaking. But, it was a bold move for the artists, and certainly a bold move for Warner Brothers who put it out.  Even if it didn’t set the charts on fire in the way that Armed Forces or Imperial Bedroom had, the album still scored on the Billboard Top 200; not bad for an album without a precedent, and in a market that was becoming more and more obsessed with finding safe bets by 1993.

Meanwhile, The Juliet Letters project would open things up for Costello artistically besides, well beyond its initial release and reception. After it was done, he had become fully armed with a knowledge of musical notation and formal arrangement. Elvis Costello’s collaboration with opera singer Anna Sofia Von Otter For The Stars, and his Il Sogno in collaboration with the London Symphony Orchestra would be two examples of his expanding range as a singer and as a composer, arguably enabled and certainly strengthened by his time working with the Brodskys.

To learn more about the Brodsky Quartet, be sure to check out their website at Brodskyquartet.co.uk. There, you will learn that they have since worked with Bjork, and with Paul McCartney. So, the Juliet Letters was mutually beneficial where expanding musical palettes is concerned, with the quartet developing their extending artistic branches into the pop world, even as Costello had done in the world of classical composition.