Listen to this track by British post-punk by way of soul music collective Dexys Midnight Runners. It’s their second UK single and first number one hit “Geno”, as taken from their 1980 album Searching For the Young Soul Rebels, their debut.

A few years before their Trans-Atlantic, and worldwide hit “Come On Eileen” for which they are best (perhaps solely) known outside of the UK, it was this song that made their name, eschewing the usual post-punk textures of the late ’70s and early ’80s. Instead, this tune embraces Northern Soul and ’60s mod-scene flavouring instead. Guitars, bass, and drums were therefore augmented by Hammond organ, and big horns – classic and essential soul elements, all.

Clearly there were links to the burgeoning second wave of Ska in Britain as well, with bands like Madness and the Specials using a similar approach, instrumentally speaking. But, in some ways, Dexy’s provided a stronger tie to music as created and championed in Britain from the mid-60s.

“Geno” is exhibit A, a tune that is named after Geno Washington, an American soul singer based in Britain around this same mid-60s period. Washington was the frontman to The Ram Jam Band, a popular showband who’s audiences were made up of US servicemen (like Washington himself had been), and British soul and R&B fans alike.

But by 1979-80, what was it that Dexy’s were saying about the state of musical play by the time this song came out?

The song sets the scene of a British R&B club at the end of the ’60s with a young Kevin Rowland in attendence as Geno Washington takes the stage, an event that was famously marked with the chants of “Geno! Geno! Geno!” reproduced here in this song. “Academic inspiration, you gave me none/You were Michael the Lover/The fighter that won” go the lyrics.

Writing on top of Kevin “Al” Archer’s music, Rowland is writing about a different kind of inspiration entirely, “not being flash”, but just about what he’s “built to do.” It’s Rowland’s road to Damascus, finding out in that moment what he wants to do with his life, naming Geno Washington’s single “Michael (The Lover)” by name. I guess that positions Geno as Rowland’s Jesus, to take that metaphor to it’s logical conclusion.

Yet, Rowland isn’t that reverent. Neither is this song.

Starting from the obvious is Rowland’s vocal style, which is just bonkers, not an imitation of anything that has existed before or since. You can barely understand what he’s singing at all, let alone be successful in trying to link it to any traditional approach to singing R&B. But, that’s not really the point. Whatever it is, Rowland’s delivery is full of joie de vivre anyway, yet with a certain desperation underneath. It’s perfect for a song about youth, and looking for a path. And it’s perfect for an audience who is engaged in the very same thing. 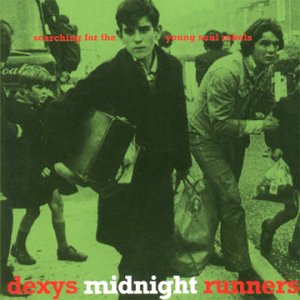 And check those tempo changes. This is a song that just doesn’t sit still. Like the effects of Dextroamphetamine, that being a popular upper as consumed by mods for which this band is named, the song’s tempo jumps around ecstatically. And even if you couldn’t quite call this a soul song in any academic sense (appropriate to the lyrics!), than the song certainly embodies how inspirational music can be on a young audience.

With this song, you can feel that inability to sit still no matter how old you are, and are reminded of the need to get a sense of what we’re all “built to do” at a time when there’s a lot of pressure from all around on young people to do that. Underneath all that is the acknowledgement that this isn’t always easy, a struggle that is often masked by youthful arrogance. That cocktail is pretty hard to resist.

In 1982, “Come On Eileen” scored the band their first international smash, so much so that the success they had with that song completely overshadowed all of their other output. This made many a North American radio listeners think that they were one-hit wonders. But to me, “Geno” is the better song.

The band would put out an album in 1985 that critics loved, yet very few people bought – Don’t Stand Me Down.  Then, they broke up for a while. Yet, now after a solo career from Rowland and several aborted reunions across the decades, Dexy’s is back with a new record this year – One Day, I’m Going To Soar.

You can read a review of Dexy’s One Day I’m Going To Soar on BBC music.