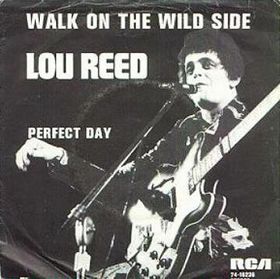 Listen to this track by former Velvet Underground quadrant and subsequent solo rock ‘n’ roll animal Lou Reed. It’s “Perfect Day”, a song taken from the David Bowie and Mick Ronson-abetted 1972 album Transformer, which was Reed’s second solo album. It served as the B-Side to his possibly unanticipated hit single “Walk On The Wild Side.”

In relation to that A-side which made his name as a solo artist,”Perfect Day” was something of a slow-burn, pop culture-wise. It enjoyed something of a resurgence when it appeared in a pivotal (and disturbing) scene in the 1996 film Trainspotting. In that scene, lead character Renton (played by Ewan McGregor) shoots up heroin only to overdose,  all shown in graphic detail. He’s then unceremoniously loaded into a taxi cab and anonymously sent to hospital by his drug dealer.

It was the song’s reputation (or perhaps its writer’s) as being connected with the drug that made it somewhat of an appropriate choice as a soundtrack to an overdose. Yet, as much as the stories about this tune have circulated as being a love song to heroin, I think the love expressed in this song goes a lot deeper than that, and says so much more. This is particularly striking when it comes to the song’s ambiguity, despite how easy it is to take it at face value.

So, what is lurking beneath the surface of this song?

“Perfect Day” appears to be what it says it is; a perfect day, one spent enjoying simple pleasures with a loved one. It’s musically supported by Mick Ronson, who’s delicate piano lines and sympathetic string arrangements perfectly contrast Reed’s weary lead vocal. Ronson was, of course, the lead guitarist and musical director  in David Bowie’s Spiders From Mars at the time this song was recorded, by then one of the hottest live bands in Britain, and about to conquer North America too.

Bowie himself serves as co-producer on the record with Ronson and Reed, which is something of a payback given Bowie’s admiration for the Velvet Underground. The results of these people working together were practically inevitable. It is a landmark record by anyone’s measurement. And “Perfect Day” is the best of the bunch.

Filled with pathos, tenderness, contentment, and dread, all of the complexities of human experience seem to live together in this song that celebrates the simple things in life that bring meaning and connection. Even as it’s easy to take the song at face value, it’s just as easy to wonder about who the narrator is, what he really values, and what forces drive him. In addition to the images of idyllic times together, there are lines in there which seem to indicate that there is more at work here than meets the eye, specifically that this island of joy described in the song is actually to be found in a sea of turmoil. It’s about being surprised by contentment, being blindsided by happiness. “You made me forget myself/I thought I was someone else/Someone good” is effectively saying that this perfect day being described in the song doesn’t fit in the life of the person describing it.

As if to underscore this, the line “you’re going to reap just what you sow” is a wrench in the works of a contented day that a listener cannot ignore.  Between trips to the park and to the movies, this line comes off like an ominous portent that contentment cannot and will not last. This is perhaps a reminder to everyone that perfect days aren’t common, and that they should be treasured. Fair enough. But, is this line of reaping and sowing a warning to the loved one who’s unwisely let the narrator into their life? Is it the echo of some dark karmic promise that haunts the narrator? It’s this ambiguity and dual nature that provides the kind of tension that makes this song impossible to resist.

It’s depth has since captured the imaginations of many. The song would be covered extensively over the years by a wide variety of artists, from Australian novelty singer Rolf Harris, to Duran Duran, to Susan Boyle.  It would feature most famously and effectively as a charity single for the BBC in 1997. On that version, with an accompanying video, Lou Reed is joined by an incredible crosssection of musical talent, from Emmylou Harris, to Bono, to Evan Dando, to Dr. John, not to mention future wife Laurie Anderson, and former co-producer of the original cut David Bowie. The single was a smash success, with over two million pounds raised for the BBC.

Out of darkness, sorrow, drug addiction, and spiritual turbulence, the memory of a perfect day came to some good for the Beeb, at least. But, it also stands as a crowning achievement for Lou Reed as a songwriter who understands subtlety, and a certain strain of understated tenderness, even if he’s also known for the darker side of human experience, too.

Here’s a clip in which Lou Reed talks about his approach to writing, and to performing.

And of course, there’s always LouReed.com to see what he’s been up to since.