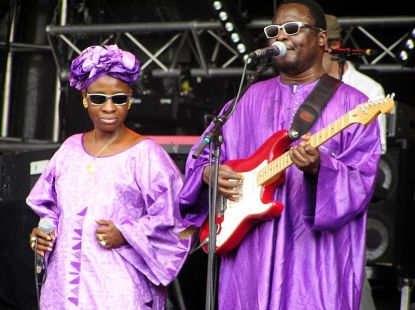 Mali is a hotbed of musical greatness on many fronts, particularly for reasons that the music made there is known to show the musical genetic materials that link traditional African music with many strains of Western pop music. Specifically, Mali and West Africa as a region in general is the ancestral home of the blues, the cornerstone of many musical forms which flow therefrom.

But, Mali isn’t contained in a musical or cultural bubble. The funk, rock, blues, soca, reggae, and even disco grooves to be found in this music from Mali is a result of true cross-polination, particularly here with Amadou & Mariam’s work. I think it’s the result of songwriters reaching for sounds that appeal to them, and pulled from their cultural traditions, sure. But, it’s also the result of exposure to traditions outside of that culture.

Hey! It’s just like every other region where songwriters operate!

So how does this duo’s approach break the music out of the “world music” tag?

Both blind, Amadou Bagayoko and Mariam Doumbia met at Mali’s Institute for the Young Blind, both involving themselves in the Institute’s musical programs. This eventually led to their marriage and early collaborations in the early ’80s. They branched out, while still overseeing the music program at the Institute.

As they grew in stature, playing a strain of African blues music, Amadou and Mariam became acquainted with many Western musicians you’ve heard of; Stevie Wonder, Damon Albarn of Blur/Gorillaz (who produced them on the Welcome To Mali album), Jake Shears of the Scissor Sisters, Beth Orton, and TV On The Radio, to name but a few. They’d open shows for U2, Coldplay, and Blur.  They would appear on stages shared by Alicia Keyes and John Legend, too. That’s quite an array of musical tributaries represented, as I’m sure you can see.

I saw Amadou & Mariam perform at this year’s Burnaby Blues & Roots Festival this past August, and what a delight they were. One thing I went into it expecting, not personally even scratching the surface of what the African continent offers as far as music goes, is a sort of generic “world music” with no surprises.

What I heard was a band with a full command of popular music across the board, including rock music. Sure, I heard the roots of Western music filtered through a Malian lens. But, I also heard that music being affected, and transformed in turn by Western musics reflected back onto it.

The music is undeniably African because the musicians playing it are African, influenced as they are by high life music, and other West African forms. It’s the same way that whatever Dolly Parton sings is going to come off as a kind of country music, just because she’s the one singing it, being from Tennessee where much of that music was invented in its modern form, and also having major impact on popular music as a whole. But, that doesn’t restrict the music itself in terms of other strains of music finding their way into the overall sound that push it beyond its origins.

There are moments when you realize that humanity shares some pretty basic requirements that go beyond the boundaries culture and geography. And moving and singing along to music is undeniably among them, from wherever one happens to hail.When Amadou & Mariam played this song, with it’s call-and-response push-me-pull-you rhythm, the crowd were dancing together, responding to the call in more ways than one.

And as corny as it sounds, I was reminded that music is, in the end, the great unifier, making generations, styles, cultures, and genders, completely beside the point. It was the sheer impact it had on us on a visceral level that really mattered. At a certain point, it didn’t feel so much like a performance. It had become a communal act in which we all had a part.

Amadou & Mariam are active recording artists and dynamic music festival participants. Catch up with this dynamic duo at the official Amadou & Mariam site to see where they will play next. And then, go and see them.