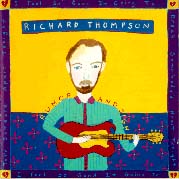 Listen to this track by guitar demigod and British folk-rock granddaddy Richard Thompson. It’s “1952 Vincent Black Lightning”, a song about a boy, a girl, and a motorbike, taken from Thompson’s 1991 record Rumour & Sigh, a gem, and a perennial live track from his best-selling record to date.

This record was something of a mid-career high point for Thompson, who’d been making records for a pretty long time by this point; over two decades, if you include his work with Fairport Convention, and the multitude of times he served as a sessioner for other artists. But,  just because an artist of his experience had had a few records out, it didn’t mean there wasn’t a masterpiece still left to deliver. And that’s what I think this song is; it’s a masterpiece.

It’s a song that gathers all of his strengths as an artist in one place. It features his superlative guitar-playing skills. It demonstrates his capacity for compelling storytelling in the style of traditional English ballads. And, most importantly of all, it shows his flair for emotionally connected undercurrents to a song’s narrative that makes you care about the characters, just as you should in any story.

But this song is important beyond what it represents in terms of Thompson’s output. It provided an important stylistic bridge, or rather pointed the way to one, from one musical tradition to another.

It’s hard to pinpoint my favourite Richard Thompson tune, but this is certainly a contender; a story of an outlaw and his dual love for the titular vintage motorcycle, and Molly his red-headed girl wearing black leather (his favourite colour scheme – and who can blame him?). It’s a compelling story that seems older than it is, having a solid footing in traditional English folk music, of which Thompson is a major modern proponent. But, it’s also a Western, the young man James on a formidable mount, at odds with the law, with a bank robbery and gunplay to ensue. As such, it crosses the cultural ocean pretty easily.

This aspect of things made it pretty easy then to be translated by another artist across the pond. Country-bluegrass picker and songwriter Del McCoury’s version of “1952 Vincent Black Lighting” would provide him with a hit, seamlessly interpreted into another genre, albeit with “Box Hill” in Surrey, England exchanged for “Knoxville” in Tennessee as the setting for the unfolding drama. Given that American mountain music from that region and multiple strains of country music in general are derived from the folk music of the British isles, we’re reminded how artificial those genres really are, points of geography notwithstanding.

Because the story behind the song is universal, it would be recorded by other songwriters from various backgrounds, soon to become something of a modern roots music standard by artists all over the map. Greg Brown, Mary Lou Lord, and the Buckhorn Mountain Boys would all record it, among many others. But, the power of this song isn’t simply about how musically supple it is where cultures, styles, and genres are concerned. What really makes it powerful is the pathos it provokes.

As listeners, we know exactly who James is, and what motivates him. And we know the same about Molly. These are people who are very easy to fall in love with, so we connect instantly with their falling in love with each other despite the doom that hangs over them. And we feel sadness and triumph as James meets his fate, and as the ’52 Vincent passes from one person to another as a final act of love, literally giving everything he has to the one he loves.

Richard Thompson is an active musician today, still putting out albums containing songs that sound as if they’ve always been around. Investigate the official Richard Thompson site for news about tours and new releases.