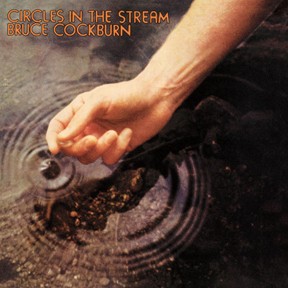 Listen to this track by one-time mystic-folky singer-songwriter, later to turn political and social commentator, Bruce Cockburn. It’s the live version of  “Dialogue With The Devil”, a highlight from his 1977 live record Circles in the Stream.  The original version appears on Sunwheel Dance released five years earlier.

The song taps into where Cockburn was at during the earliest part of his career as a solo artist, writing songs with a sort of C.S Lewis meets Mississippi John Hurt approach. Not many artists have hooked into that kind of vibe, of course.

But, Cockburn was interested in the nature of spirituality, how it’s manifest in human experience, and what symbols and stories, particularly those couched in natural imagery, helped to reveal it. I think he was also interested in how American rural blues playing and English folk styles converged, which is certainly revealed in his work at the time, with this song being among the greatest examples

As far as this song goes, the scene is one we’re familiar with. It’s a variation on the story in the Gospels of a meeting between Jesus and the Devil in a remote location, with a tempting offer from the latter; no less than fame and fortune in exchange for surrender. But, in Cockburn’s story, what is the nature of that dialogue, and what is the temptation?  More importantly, does it have any bearing on where Cockburn would turn as an artist?

Well, first it should be said that by the time he’d recorded this show at Massey Hall in Toronto in April 1977 for the Circles in the Stream album, he’d been busy with the business of trying to capture his thoughts on how spirituality, nature, and the self converged. This approach to writing songs sounds kind of ponderous on paper, perhaps. It certainly would be if Cockburn wasn’t also a writer who understood how weighty ideas can work most effectively within the context of accessible, and aurally dynamic music.

And the ideas in this tune are pretty weighty.

The narrator is standing on a rock in the river, and contemplating what the world offers, and what love promises, including the possibility to be left with nothing but pain. This situation is representative of where all of us often find ourselves in this uncertain world, which can drive us to self-destructive indulgence, or perhaps even some empty ideology that demands our absolute devotion in exchange for our sanity. But, that celebration can take another form, when we’re brave enough to discover and revel in the beauty and profundity of life, as uncertain as it is, that we would miss otherwise were we to take the former path.

The “why don’t we celebrate” in this song can go either way.

By 1977 and by the time he recorded this version of the song (complete with wah-wah pedal!), he’d pretty much figured out which direction to take, having explored the themes of ecstatic spiritual experience over the course of several albums through something of a Christian mysticism lens, yet without being in any way preachy, or forgetting to write interesting, and instrumentally skillful music. Yet this internal emphasis on what it means to “celebrate” in a spiritual sense would evolve into yet another phase of his songwriting in the decade to follow – political commentary, and action.

Soon after this performance, he’d have a hit single Stateside in “Wondering Where The Lions Are” that landed him an appearance on Saturday Night Live by 1980. He would also experience the end to his marriage during this same period. Like a splash of cold water to the face, or maybe a giant wave, Cockburn had seemingly awoken from a decade-long spiritual reverie. But, awake he was, fueled by embracing this awe of a ‘world of wonders‘ (that being the title to  a politically-charged song and album he would write by 1986) alluded to here on this earlier song.

Cockburn had become ready to “love his neighbour” as his faith would dictate, even if it meant meeting them in some of the most economically depressed, and sometimes downright dangerous places in the world; Honduras, Nicaragua, Tibet, Mozambique, Afghanistan, and many others. And we’d get to hear about it, not through the eyes of a detached songwriter, but rather as one who showed us through his own experiences that humanity, and human experience can thrive in some of the most hostile and seemingly hopeless of environments.

Standing on a rock in a river had turned into fighting, and singing, his way upstream.

Bruce Cockburn is an active musician, songwriter, and socially engaged public figure today. Catch up with him on the Bruce Cockburn official website. Among other things you’ll find there is references to the documentary Pacing The Cage, which discusses something of his take on spirituality and how it’s communicated artfully through songwriting, performance, and political engagement.