Here’s a clip of the Cute Beatle, who’s celebrating a birthday today (he’s 70!), Paul McCartney. It’s his Wings-less #1 hit single from April, 1980, “Coming Up” as featured on his second recorded-entirely-solo album which is appropriately titled McCartney II, released that same year. The song was a hit in at least two forms; one being the synthesized studio version, and the other a December 1979 live version recorded in Glasgow with a full band.

The live version of “Coming Up”, which featured McCartney’s rock growl of a voice and backed by Wings, garnered attention mostly in North America even though it was technically the b-side. The studio version on the A-side, which features his voice that’s been treated by varying tape speed effects along with a more synthesized texture, won him listeners in the UK.

Maybe this reinforces the generalization that European audiences favour pop artifice, and North American ones prefer rock-oriented true grit. Either way, the song also garnered a positive response from a certain distinguished individual listening to the radio by 1980 – John Lennon.

The video for the song features comedy versions of an all-star band, “The Plastic Macs” which is a name that is possibly a cross between the Plastic Ono Band and the Dirty Mac. Maybe that alone caught John’s attention.

The members of the band are portrayed by McCartney with the help of his wife Linda.  Some of the “musicians” portrayed are Hank Marvin of the Shadows on guitar, Ron Mael of Sparks on keyboards, and most amusingly, a head-waggling Beatle Paul playing a trademark Hofner bass. Paul had seen the same footage of himself that we had, apparently.

In some ways, this song was something of a return to his early R&B rock roots, which may be another reason why Lennon was so struck by it. Sure, there’s all kinds of  late ’70s and early ’80s stylistic fingerprints on it. But at heart it’s a step away from his twee-pop reputation, too – it’s no Silly Love Song. In fact, beneath the tongue-in-cheek arrangement lies a pretty funky, gritty little tune. Listen to the drums as they interlock with the stomp of the bass. Listen to the soulful rhythm guitar. It even has horns! Well, kazoos on the studio version.

“Coming Up” is actually his only #1 record released solely under the ‘Paul McCartney’ name to date – no ‘Linda McCartney’, and no ‘Wings’ appeared on the label, unlike the hits of the past. It seemed he was ready for a new decade in putting it out as a true solo single. Maybe he felt the same as he’d done in 1970, with the release of his first solo record, made under similar circumstances and after the end of his tenure with a hit-making band. 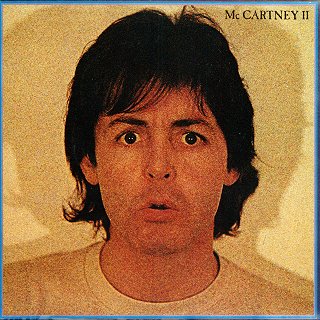 Even if the McCartney II album is looked at as something of a patchy beast these many years later by many fans, you can kind of see why he chose to record an experimental pop record using a lot of synthesizers, and without the band that tied him to the previous decade. It was 1980! A new decade had begun, and it was still early enough for radio singles to be largely unhindered by specific styles or formats on mainstream radio. You want a single with a distorted vocal and a kazoo horn section? No problem!

The year this song came out, mainstream radio was a pretty open frontier for everyone, driven more by local markets, and less by the homogenized corporate broadcasting behemoths which would follow later in the decade. That was one of the best things about radio during this time. The charts were more indicative of people’s tastes, and less about corporate back-scratching that would drive national playlists from the mid-80s onward. It was more democratic, and less demographic. This meant a more diverse ecosystem of hit singles.

In 1979-80 when McCartney wrote, recorded, and put out “Coming Up”,  here’s just a sample of the songs that were being played on the radio:

These songs were all on the same charts and played on the same stations, people; pop rock, soft rock, R&B, dance,  novelty, country, black, white, male, female, established artists, and new young hopefuls, all sharing the airwaves together.

Whatever your opinion of those songs listed above, the fact remains that radio during this period was about possibilities, and sometimes out and out long-shots. It was not about sure-things. The next song you heard might be one you didn’t like. But, the chances of hearing a song like one you’d never heard before was much greater.  It also freed up artists to put out weird records if they wanted to, just to see what would happen. And often, as in this case, it paid off handsomely.

In this sense, pop radio had vibrancy, and a piquant tang of the unexpected by 1980. It was the age of the pop single! It’s one of my favourite periods listening to the radio, just because anything could happen from week to week; any kind of song could be a hit in any sort of genre, as long as it had personality.

And “Coming Up” certainly has that – personality. But, it would be among his last #1 radio singles to date.  The rest of the decade would see radio get more and more formatted. In this, radio in the late 70’s and early ’80 was a golden period  in the being-surprised-by-the-pop-charts stakes, even as the hope of a Beatles reunion came to an abrupt end. This made this period the beginning of the end of an era in more ways than one.

It should be recalled that the solo-recorded McCartney II was of course preceded by the first of his self-titled, self-performed and produced releases – McCartney. To find out more about how that record was made, take a look at this clip that tells the story of the making of Paul McCartney’s first solo album, McCartney, which includes some incredible home movie material of Paul, Linda, and the kids.