Here’s a clip featuring Ontario singer-songwriter Matthew de Zoete (that’s pronounced duh-ZOO-tuh, kids). It’s the video for his song “Colour Film”, the title track of his newest record Colour Film released at the beginning of this month, and his third. 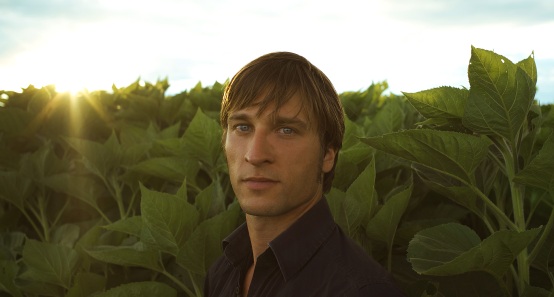 The record follows up 2008’s Bottom of the World, and 2006’s Across The Sea, as well as multiple tours of Canada,  the United States, and Europe to support them. By now, de Zoete has shared stages with Great Lake Swimmers, Luke Doucet, and Justin Rutledge among others.  All the while, he’s made his home in rural Ontario, on a farm with his wife and daughter.

His approach to this new project was to write a series of songs that could be a soundtrack to a film, suggesting characters, tone, and the shape of a story. This cinematic approach certainly carries over to this song, inspired as it was by seeing Super 8 film footage of his grandparents in the early 1960s, as later to be seen in the video.

In “Colour Film” we find the theme of connectedness, of tying the past together with the present, and realizing that the span of years that separate the eras between us, our parents, and our grandparents isn’t indicative of how differently the people in each era saw the world or interacted with it. With this song, we realize that it’s only the cosmetics of each era that change. Love, fun, sadness, joy, and the whole contradictory package that is the human experience was just as real then as it is now. The black & white world of the past was just as present and in colour for those who lived in it.

It’s a powerful idea. It certainly takes a level of maturity in a songwriter to pull this idea off without ponderous, over-earnest results. Yet, here it is as light as air, letting the listener fill in some of the spaces as the best pop songs must.

The song reminds us that the world as we know it is still in motion. Even in that, any division between the past and present is just another illusion.  Sooner than we think, our own the world as we know it today may be looked at as something of an abstract by younger generations, a misty era to be thought of through a dusty lens, and in a grainy film stock in the minds of our children. In this, the world hasn’t really changed at all. It’s always been that way.

For more information about Matthew de Zoete, check out the Matthew de Zoete official site, where you can discover social media links, as well as links to other material featured on the new album.