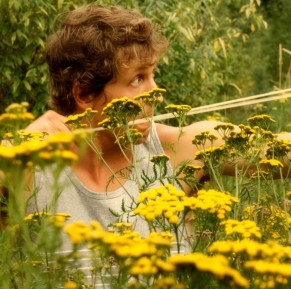 Here’s a clip of up-and-coming singer-songwriter from Winnipeg, James Struthers. It’s the single “You, Me, and Optimus Prime”, a song about childhood innocence, and about how to keep childhood wonder in your life.

Even if this tune is an effervescent pop song about the treasures of childhood, the shadow of getting older is lurking just by association.  Yet, the “heaviness of being” situation that we’re all in, being creatures in time as we are, doesn’t drag down the music. It certainly doesn’t affect how much fun the video is, featuring a very playful Optimus Prime as James’ co-star.

The video was created with the help of LA-based Funk Factory Films. The production team, Nathan, Trevor and Morgan Funk, all contemporaries of James’, understood the cultural and generational reference points that underscore the song. The result was this video, something of a childhood fantasy that is absurd, in a good way. James explains the approach himself here:

“Each member of the team contributed equally to the story line (and) I can definitely tell you that all four of us were deeply inspired by the awesomeness of childhood, and our love for Transformers. The video tells a story of personal growth, but coaches us to keep a sense of adventure and lust for life close to heart. As Steve Jobs said, ‘Stay Hungry, Stay Foolish.’”

As James mentions, another layer to this is that childhood innocence and enthusiasm can serve us well in our adult lives, whether we’re 22 or 102. What we get out of the song is how important being connected to the best parts of our childhood actually is. In this, growing older doesn’t have to be a burden, or something to be feared. In fact, it makes growing up that much more of something to look forward to, when we get to cast aside outdated ideas of having to stop being frivolous, or full of wonder, just because we’re adults.

One of the most notable things about the creation of the video for this song has to do with how it’s been delivered, and how it’s helping to build up an audience for James’ music. The Funks explain the importance of the Internet, and specifically YouTube, to the commercial and artistic momentum that an artist like James starting out has at his disposal. Of course, it also has an impact on how filmsmaking with a YouTube audience in mind plays a part too, an artistic avenue made accesible without the help of a traditional production studio.

Here’s what they said:

The web has literally democratized the entertainment industry as a new form of distribution, which, in the past, had been largely controlled by big studios and broadcast companies. Filmmakers and artists are realizing that budgetary constraints can be easily overcome with their own creativity and ambition. We really are excited to be contributing to this rebirth.

This of course has implications for music, as well as it does for film production. This doesn’t mean that a simple YouTube video is going to be the prime engine to building an audience; the traditional rules when it comes to songwriting and touring live still apply. So, despite his embrace of social media, James Struthers is still a hard-working musician, writing songs, and playing folk-festivals to exercise his musical chops in front of live audiences, citing artists as diverse as Feist, Neil Young, Norah Jones, and the Beatles as artistic reference points.

To continue to trace the rise of a new artist, check out the James Struthers official site.

You can buy tickets to see James Struthers at The Media Club in Vancouver tomorrow night, along with Laurell and Tyler Del Pino.