Listen to this track by Edmonton-based new wave acolytes Cygnets. It’s their 2010 track “Let’s Make A Video” as taken from their debut album Bleak Anthems.

You could be forgiven for thinking that this tune is a lost track from the height of the new wave and post-punk period of the early 1980s. But, this is a 21st century creation in more than just one sense. 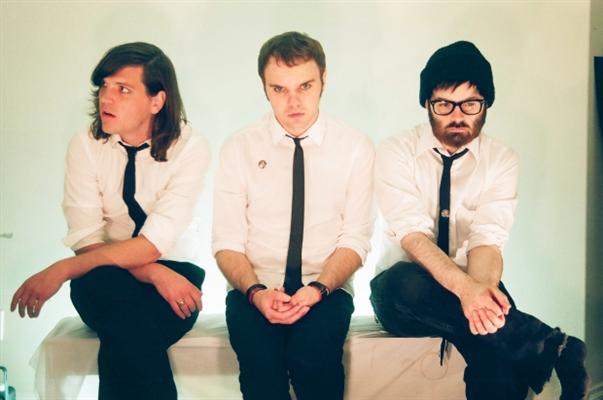 The band, a trio from Edmonton here in Canada (and not Sheffield or Manchester in Britain, despite the stylistic ties to those cities…) wear their new wave colours proudly, referencing Joy Division, Depeche Mode, China Crisis, and early Talk Talk unabashedly. But, what makes them a thoroughly modern concern is their approach to distributing their music – on the Internet, and with the option of free downloads, paying for their continued efforts through supplemental fan donation.

Cygnets is the result of the songwriting of singer and bassist Logan Turner placing his work in a band context, with friends and collaborators Dan Snow (synthesizers) and Chris Bruce (guitar) joining him. The result was Bleak Anthems, their full-length debut, after a self-titled EP the year before. The record was meant as a deliberate reflection of dark themes against celebratory music which, if you’ve been reading this blog long enough, you’ll know is a favourite musical dynamic of mine.

And despite the pessimistic associations connected with this kind of post-punk sound, the band are idealists, planning to make their music accessible by giving it away. It seems to work for them, with a new record out, Dark Days, featuring their single “Teenager”. Actually, while you’re here, you might as well watch the video for “Teenager” by Cygnets.

You can find out more about Cygnets simply by visiting the Cygnets site, for bios, news, and free downloads. You can also donate to the band on that site, to help them continue to do what they do.

Of course for you more traditional types out there, there is always the option to buy records by Cygnets on iTunes.