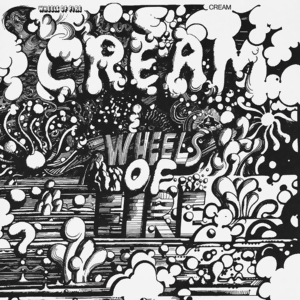 Listen to this track by British power trio, “supergroup”, and hard-rock pioneers Cream. It’s their live performance of Robert Johnson’s 1936 song “Crossroads Blues”, a take on the song that also quotes another Johnson song, “Travelin’ Riverside Blues”, and showcases the three-way assault of each member of the band (For you stereo listeners: Bassist Jack Bruce to your left, drummer Ginger Baker just behind you, and Eric Clapton to your immediate right).

The song itself is a tale of an unnamed dread, a fear of nightfall and being out on the road alone. Many associate this song with the legendary and very often repeated tale of a deal going down at a crossroads in Misssissippi, where Robert Johnson is rumoured to have sold his very soul in order to become no less than King of the Delta Blues Singers. Johnson’s influence is certainly proven by this cover version, performed in March of 1968 at San Francisco’s famed Winterland Ballroom, a mecca of rock ‘n’ roll history. Cream scored a #28 hit with this rendition of the song.

But, what is the real story behind this tune, and the real source of dread hinted at in its lyrics? Is it the terror of a supernatural force, or is the threat the song’s narrator is alluding to more of a mortal concern?

Cream’s take on the song underscores Clapton’s raw energy as a guitarist, but also reminds us that the bass, here wielded by Jack Bruce, is just as much a part of the delivery, holding down the foundation of the song, but also rhythmically complementing drummer Ginger Baker’s primitive thud-meets-jazzy-dexterity as it does so. Yet, the most compelling part of this song is about the tale, the atmosphere, the legend of a sold soul, and a possibly regretful seller.

The blues is nothing if not mysterious. As has been mentioned by me a number of times here, it is a form that stretches back in an indeterminate span, crossing a number of eras and cultures. The blues is an adaptive beast, not only with a long and dark past, but also with a more recent history of being very modifiable.  When you think that Hank Williams, Elvis Presley, Nina Simone, Jon Spencer, Beck, Amy Winehouse, and Jack White all touch upon the blues in some way, it’s easy to understand that  if rock n roll is here to stay, it may be because its connection with the blues is so tenacious. One might almost think that there is something otherworldly about it, and not unthreatening either. After all, it is known as the Devil’s music by many.

But, with the blues having crossed so many cultural lines by 1968 in time for this performance, and well beyond then to today, it’s easy to forget what life may have been like for a black man or woman in the American South of the 1930s, traveling on their own on unfamiliar roads. Writing about being isolated and afraid on the road alone and unable to ‘flag a ride’ was not such a stretch for many bluesmen when another story later to be heard in song – Billie Holiday’s “Strange Fruit” – was tragically common.

When those looking to kill you because of your skin colour are on the prowl, and you find yourself alone on a country road as the sun is going down, you have reason to be terrified. Lynch mobs from the 1800s to the 1930s  in particular were a given. With these roving bands of thugs seeking to find, and murder black men and women for sport, a soul-hungry Devil becomes something of a fifth wheel where being scared shitless is concerned.

I think what this rendition of the song captures best is the panic of that feeling, with Jack Bruce’s bass sounding like a hellhound that won’t be evaded, Ginger Baker’s drums thudding like gigantic footfalls, and Clapton’s fiery guitar sounding like it’s running to beat the devil. Of course, the tension between the players may have something to do with the frenetic pace of the song, with the band quickly approaching its last days together until their one-off reunion 37 years later in 2005.