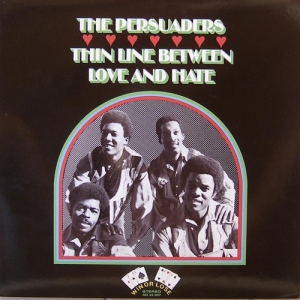 Listen to this track by million-selling New York soul vocalists the Persuaders. It’s their signature single and their biggest hit to date from 1971, “Thin Line Between Love and Hate”. Here is a classic tale of neglect, seeming acceptance, pent up anger, and one of the best lyrical payoffs in the history of soul music.

Pop music is full of stories of how love can go wrong, and how lovers can become callous, taking each other for granted. Many more are about the scorned woman, the one waiting at home while their men are out “doin’ the camel walk”.

But, with this song, the emotional landscapes are not quite that easily defined. We have the man who is out on the town at all hours, and his seemingly patient and selfless other half waiting at home for him, even at 5 O’clock in the morning, ready to fix him something to eat, unfazed by his absence up until then.

Who could predict how the story would end up from here? And, what else does this song reveal?

The Persuaders’ signature hit, which scored number one on the Billboard R&B charts with crossover success on the pop charts in the top twenty, certainly touched on the darker side of love, and on how dysfunctionally men and women can relate to each other in general. To me, there is something of a Wile E. Coyote-esque conclusion, as the narrator finds himself bandaged “from foot to head” in the hospital after his girlfriend’s saintlike patience reaches its limit. The first time I heard it, I chuckled. But, on reflection, this song really is about rage, particularly a woman’s rage. That’s not so funny.

It’s interesting that the song has since been covered extensively, most prominently by women singers. The Pretenders covered it in 1984 on my favourite album of theirs, Learning To Crawl. Annie Lennox covered it on her Medusa record. R&B singer Shirley Murdoch sang the song for the soundtrack of the movie A Thin Line Between Love and Hate. The  film features Martin Lawrence as a philandering male chauvanist, undone (and also hospitalized) for his two-timing and other counts of misogyny by a female revenger, not unlike the song.

The song becomes less about the comeuppance suffered by the narrator, or even about the story specifically involving the pent up anger of a woman who is driven to violence. What the song seems to do is cast an eye over what many women may be struggling with in their relationships, and about how clueless men can be about it. Not all of those women will end up putting their men in the hospital, of course. But even if their rage doesn’t kill anyone, this kind of rage tends to kill feelings of affection, and then relationships in general after that.

To me, that’s the sobering heart of this tune. Perhaps this is why it struck such a chord with record buyers, and with women singers who covered it.

The Persuaders wouldn’t do better than this hit chartwise, although a couple of other songs they recorded would be covered and made famous by other artists. For instance, Rod Stewart and Maxi Priest would score hits with ’80s versions of “Some Guys Have All the Luck” which the Persuaders recorded to less fanfare in 1973. Some guys indeed. Yet, their self-penned “Thin Line Between Love and Hate” adds incredible dimension to soul music and pop radio history.