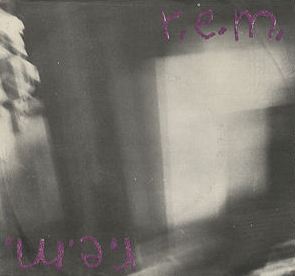 Listen to this track by a young and hungry Athens, Georgia quartet R.E.M. It’s “Radio Free Europe”, a song that would be represented in a re-recorded form on their first album Murmur by 1983. The song would first be a single recorded on the independent Hib Tone label two years beforehand. The single was produced by Let’s Active prime mover Mitch Easter. It would eventually appear in this original form on the 1988 compilation Eponymous.

This version was recorded in the summer of 1981 before their deal with I.R.S records which would put out Murmur and set them on their path to pop greatness. This earlier take of the song moves at a faster clip, with scrappier playing, and with characteristic impenetrable lyrics that showcase Michael Stipe’s unique vocal style.

The pop sensibilities are locked into place, even this early on, helped production-wise by Easter, who knew a thing or two about jangly guitar music that hearkened back to a mythical, musical golden age, yet also infused with a modern sound.

So, how did  a song that started off on an independently recorded and distributed single become one of Rolling Stone‘s Top 500 songs (at number 379) of all time?

R.E.M formed at a time when local scenes were enjoying new avenues of exposure, specifically through college radio. As such, getting singles cut was a prime concern, along with generating a live following.  Even if independent bands and labels have always been around, it was at this time that the idea of alternative music was beginning to emerge. A great deal of importance in this framework was placed upon being able to put across music that didn’t have the mark of corporate gloss on it, which was yet another musical phenomenon which was beginning to emerge exponentially by the 1980s.

Producer Mitch Easter, then with his own group Let’s Active, had limited resources in a small North Carolina-based Drive-In studio. The suggestion that the band cut their single here was through Peter Holsapple of the dbs, another band working in the same musical milieu at the time.

Easter and R.E.M used what they had to hand to create this version of a song that was bigger than its origins. The song is murky, and dense on this recording. Yet the sound of the band is as clear as day. It would be this which would catch the attention, first of RCA (who the band resisted), then I.R.S, once the single was released.

When putting the song together, Stipe was making up the words as a means sheerly to use as a framework for his singing, rather than trying to convey a meaning, or message. As a result, the song has an air of mystery to it. And with Easter, the band would record what they consider to be their favourite version of the song.

Only a few thousand copies were released, albeit to critical acclaim. The song was remixed as well, overseen by Hib Tone owner Johnny Hibbert, once the initial run had sold. The success of the single in all its forms up until then would lead to an EP – Chronic Town – which was also produced by Mitch Easter. As to this initial single, Easter recognized a unique entity in R.E.M, as recounted in Richard Buskin’s article about the making of the single:

“I had heard of REM and I’d seen a poster of them in a club,” says Easter, who had formed his own jangle-pop trio, Let’s Active, “but I still didn’t really know what the guys did until they started recording the next day, and at that point I was kind of surprised at the music they performed. They had a funny sensibility, because back then many bands were on one side of the punk fence or the other, whereas these guys were in their own sort of category.” (Read the full R.E.M “Radio Free Europe” article by Richard Buskin)

This song provided the template  for the early R.E.M sound mentioned in Easter’s quote, and would provide the momentum they needed to make a go of a first album. The experience  of recording “Radio Free Europe” with Easter introduced the band to the process of making records, and how to be creative in the studio. It also provided the template for a great many other bands, carving out an American post-punk sound, while also drawing from guitar music from the ’60s and ’70s.

Smash album sales and critical acclaim, which seemed so far away while recording their first single in a small studio in North Carolina, wouldn’t be far behind.

And as we muse on the very early career of this era-defining band, read this article on the Huffington post that announcesthe break-up of R.E.M, too, that draws a 30-year career to an evident conclusion.