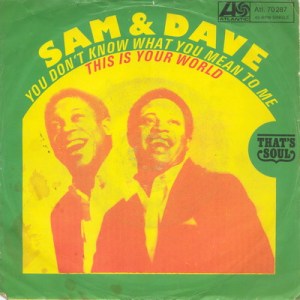 Listen to this track by two-in-one soulmen and Stax/Atlantic “double dynamite” recording giants Sam & Dave (Sam Moore, and Dave Prater, that is). It’s “You Don’t Know What You Mean To Me”, as co-written by Eddie Floyd (who is name-checked in this version) and Stax house band Booker T & The MGs guitarist Steve Cropper. The song appears on the duo’s 1968 album I Thank You, their first, and last, LP on the Atlantic label.

After being signed to Atlantic in 1964,  it was decided that to keep their gritty, Southern soul sound, they would do well to work with Jim Stewart, founder of Stax records based in Memphis, a label that Atlantic served as a distributor. They would also  work with writing team of Isaac Hayes and David Porter, who penned most of their hits even after they were once again released on Atlantic.

This song, “You Don’t Know What You Mean To Me”, would be among the last top twenty hits Sam & Dave would enjoy on the last album of their career together that enjoyed top forty chart placement before their first split by the early ’70s. What would cause the well to run dry, after such a fantastic run of singles, including this one, known to be a favourite of the duo themselves?

In many ways, the mid-to-late 60s was a golden age of independently created soul music like  this. Sam & Dave were certainly right in the centre of it all at the right time, showing that this environment was fertile ground for making hit records. It helped that they were dynamic performers, unparalleled showman, and of course, energetic singers of exciting soul music at a time when a young, black audience were looking for anthems to represent them, of which a song like “Soul Man” would provide. They would also enjoy crossover pop success on that chart, too. But, by the time this single was released, it was the end of their classic run.

The duo would release a number of singles from 1969 up until 1972, without denting the charts. After a breakup during this period, they would work with a number of luminaries to get them back where they’d been when they’d been a hot ticket on Stax from the mid-60s: Jerry Wexler, Tom O’Dowd, Steve Cropper, Jaco Pastorius, Jimmy Cliff, Allen Toussaint, and others. But, their purple patch was over – times and audience expectations had changed. The strained relationship between the two men had reached a breaking point, too. Soon, by 1981, so had their working relationship, which was never that stable to begin with.

Even if Sam & Dave’s hit-making days were effectively over after this song was released, their influence on the next generation of songwriters was not. Elvis Costello, who’s Get Happy!! album plays tribute to the Stax sound that Sam & Dave typify, would come to write a song for Sam’s solo career – “Why Can’t a Man Stand Alone?”. ZZ Top would enjoy a 1979 hit with the title track of this LP, “I Thank You” on the pop charts, and Bonnie Raitt would also record that song that year. Dan Ackroyd and John Belushi would cover “Soul Man” as the Blues Brothers, and score a hit with it in the charts, and on the screen. The spirit of their friendly, optimistic soul sound would be found in the work of Graham Parker, Bruce Springsteen, Steve Winwood, Van Morrison, and many others.

This song, and others in the Sam & Dave catalogue of hit singles, proves that the joy of life born in pop music often is the result of hard labour, and toil from those who bring it into the world. But the wonder of that birth is something to be celebrated long after.