Listen to this track of a summer romance gone wrong from America’s Sweethearts, and the first ladies of 80s punk pop radio-friendliness The Go-Go’s. It’s their storming 1982 hit single “Vacation” as taken from the album of the same name, Vacation, a follow-up to their debut Beauty and the Beat, which is now celebrating its 30th (!) year. If you’re looking for a soundtrack to a bittersweet summer, then surely this is an essential addition, written by guitarists Jane Wiedlin and Charlotte Caffrey, and bassist Kathy Valentine.

The Go-Go’s were a formidable radio singles act by the time this song hit the airwaves. They were signed to Miles Copeland’s I.R.S Records, with this single in particular making its mark not only on the charts as one of the first ‘cassette singles’ on the market, but also on pop culture as a whole many years after its chart action had ended. The song appeared in Michael Moore’s Farenheit 911, on The Simpsons, and covered by American Idol’s Kelly Clarkson, among many other examples.

Yet, before they made their cultural impact, they had a rough grind getting there. The pop industry even in 1982 was a pretty rough grist mill. And the pressures of success were not easy to bear, least of all for a group of women in their early 20s.

The Go-Go’s were self-starters. They were a band comprised of five women who played and sang as well as any band on the L.A punk scene where they began in the late 70s as teenagers, and not beholden to a svengali figure that marked the times for other all-female bands. In this, they were role models, and status quo debunkers.

Their instrumental prowess was only matched by their ability to write cracking pop songs exclusively within the band, mixing Buzzcocks-influenced punk pop, with California surf-rock, with 60s girl group overtones, too. The success of the Go-Go’s as a hit singles band is of no surprise, finding a mass audience during a time when new wave and guitar-based pop was very sellable on mainstream radio. 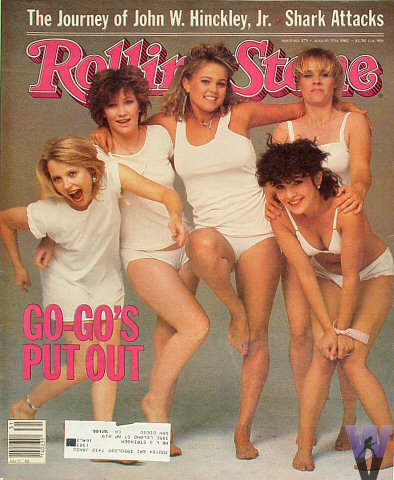 And this one was one of their most undeniable singles, with a synthesis of girl group charm, along with the clipped guitar sound that hearkens back to their roots as an edgy punk rock outfit. The love-gone-wrong theme in the song is contrasted brilliantly with a summery, ebullient arrangement. Exuberant pop with streaks of teenaged angst to suit their audience would be one of the band’s strength in terms of the writing. Yet, when the whirlwind of pop success is a going concern, a capacity for writing great songs can become something of a challenge when it comes to keeping the show on the road. This band was certainly no exception to the rule.

In some ways, their debut Beauty and the Beat was indeed a record to beat, even for the band themselves. It was a smash record, one of the most successful debuts of the decade with “We Got the Beat” and “Our Lips Are Sealed” being definitive radio singles. And the pop music industry being what it was (and is), the demand that the standard of success get better and better, bigger and bigger, even with a record-breaking debut, was placed squarely on their young shoulders.

In the relative short term, this gave way to some impressive singles in songs like this one, “Head Over Heels”, “Turn To You”, “He’s So Strange”, and “Yes Or No”. It also created a critically acclaimed third album in Talk Show.  But, it also created internal pressures, creative differences, diminishing sales returns, and with co-founding member Jane Wiedlin leaving the band by 1984. Lead singer Belinda Carlisle would go solo very successfully a few years later, and the Go-Go’s would eventually be put on the shelf.

Even if record sales would diminish over their most active years of the early-to-mid eighties, what the group created in the end beyond the pressure of selling records was a collection of some of the best pop songs written to date by any band. The Go-Go’s would reconvene sporadically in the 1990s, and even record a new record God Bless The Go-Go’s in 2001.

They would tour intermittently from 1999 to the present. Further to that, years later the songs continue to resonate, and the band would find that they continued to have an enthusiastic audience, with a highly successful tour this year to commemorate the 30th anniversary of their smash debut, Beauty and the Beat – The Ladies Gone Wild tour.

Check out the Go-Go’s official site for news, upcoming shows, and side-projects of each member.

4 thoughts on “The Go-Go’s Perform “Vacation””