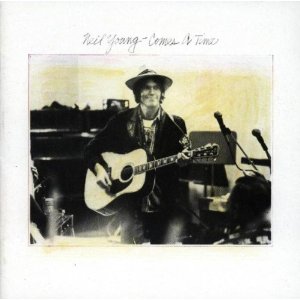 Listen to this track by Canadian singer-songwriting force of nature Neil Young. It’s “Look Out For My Love”, from 1978’s Comes a Time, a record that represented a then-recent return to Young’s musical base sound (or one of them) that brought him to prominence. This is a song about returning home after a sojourn abroad, and to a relationship that has meanwhile moved on.

Neil Young’s statement about his arguably most famous album, Harvest, more specifically about his song “Heart of Gold” was that it was the song that put him in the middle of the road, after which he “aimed for the ditch”. And it’s true that much of his output afterwards focused on a more abrasive hard rock sound on albums Tonight’s the Night, On the Beach, and Zuma.

But, another style that still kept Neil Young interested was country-folk music,with orchestral pop flavouring. It certainly was a mainstay on Harvest, and now again six years later on Comes a Time, and “Look Out For My Love”. But, how does this stylistic choice play into what’s going on in the song?

Looking back on his body of work, it seems that what motivates Neil Young in an artistic direction is almost entirely personal. And to me, it’s this country-folk sound that is one of his key stations when it comes to his modus operandi as a songwriter, particularly when the subject matter represents a turbulent set of events, or emotional high (or low) when it comes to that most important of songwriting themes – love. With this song, it seems that love is working toward a grim conclusion.

This theme of relationship breakdown is dominant on the album as a whole, from “Lotta Love”, to “Field of Opportunity”, to his cover of Ian Tyson’s “Four Strong Winds”. But, to me, this one is the most hard-hitting, and poignant of the songs that hit on the emotional geography of a separation.

One of the most harrowing periods in the breakdown of a relationship is that awful twilight zone when two people are still living as a couple, after love has gone, but before they take separate paths to new lives. During this stage, the very act of coming home to the heaviness, the burden of that situation, is agony. And this to me is what this song documents, a time when one’s heart is still bound to another, yet without the warmth and security that being with that person once meant.

Maybe this is one of the reasons Young returned to this stripped down, acoustic sound that made his name as a solo artist. Perhaps a return to the textures of the past was Young’s way of reaching back and finding his musical centre of gravity. Maybe it had to do with finding a personal centre of gravity, too.

It seemed to work, with a new chapter begun with another seminal album to follow, the celebrated Rust Never Sleeps the following year.  On this record, he featured both acoustic songs, as well as his trademark ragged and glorious hard rock sound.

Years later of course, he’d record another record that referenced Harvest, the tellingly titled Harvest Moon, the sound of a contented Young looking back with pride on a careeer well tended.

For news on what Shakey is up to, check out the official Neil Young site.

5 thoughts on “Neil Young Sings “Look Out For My Love””