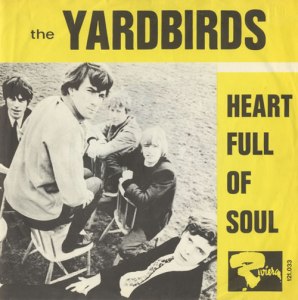 Listen to this track, a slice of fuzztone-sizzling, proto-psychedelic raga rock from vital blues-rock champeens and garage rock forefathers The Yardbirds. It’s the band’s 1965 hit single “Heart Full of Soul”, the second single released after the departure of talented, and deeply earnest, purist blues guitarist Eric Clapton. Clapton would be succeeded by another upcoming guitar player of considerable reknown –  Jeff Beck.

One of the sore points that drove Clapton to seek his fortunes elsewhere was the band’s movement away from the blues and into other areas (read: the pop charts). Their intial single in this new direction was the blantantly commercial “For Your Love”, which was certainly a hit, and modeled after a Beatlesque pop sound, which Clapton couldn’t get behind. He left to join John Mayall’s group, the Bluesbreakers.

Initially, Clapton was to be replaced by Jimmy Page. But eventually the spot went to Jeff Beck on Page’s recommendation when Page himself balked at leaving his lucrative session player salary. The Yardbirds would get Page later, though. And despite his stylistic rigidity at the time, Clapton would later befriend the Beatles, and be one of the only guests to play on one of their songs.

As Chuck Berry once said: you never can tell.

But meanwhile, the second single the band put out after Clapton left was this, a tune written by Graham Gouldman who would later go on to form 10cc. The arrangement of the song is an early foray into an Eastern sound married to western rock music, initially recorded with a sitar. Later, it was recorded with Beck playing his guitar through a fuzzbox to beef it up. The new arrangement worked splendidly, becoming something of a signature hit for the group.

This is my favourite Yardbirds tune, full of menace and darkness. Yet, the song is really about vulnerability and regret, given dimension and contrast by Beck’s angry fuzztone guitar, and singer Keith Relf’s grumbly vocal.

Although their shelf life was limited to the mid-to-late 60s as far as hit-making was concerned, the  influence of the Yardbirds would be felt in the development of rock music well beyond it. The band helped to develop the idea of the guitar hero, and the idea of a solo as a statement within the rock song, rather than just as a device to break up the verses. In addition, this tune’s dark and doom-laden tone suggests shadows of Iggy Pop and Ian Curtis, who would also build on a texturally dark, and ominous approach to performance.

Along with other British bands like Them and The Animals, the song and this group provided something of a template for burgeoning garage bands across the North American continent waiting to make ragged, bluesy guitar rock of their own. And of course the band fostered some incredible talent; Clapton, Beck, Jimmy Page, and also bassist Paul Samwell-Smith who would go on to become a successful producer, working with Cat Stevens, among others.

The Yardbirds would provide yet another service to the development of rock music, of course. Left with the rights to the name “Yardbirds” after the band fragmented by 1968, guitarist Jimmy Page would fill out a new line-up for the band, with a fellow alumni from his sessioning days, John Paul Jones, plus two musicians from the Midlands of England in vocalist Robert Plant, and drummer John Bonham.

The Yardbirds have since reconvened under the leadership of original members Chris Dreja and Jim McCarty and tour regularly.  Check out the Yardbirds official site.

[UPDATE — July 24, 2015 — check out this feature on Rolling Stone magazine that provides a vital overview to the importance of what The Yardbirds contributed to rock music in the 1960s, and as a whole]

2 thoughts on “The Yardbirds Play “Heart Full of Soul””

Leave a Reply to On The Flip-Side Cancel reply