Listen to this song by indie songwriter-turned-soundtrack composer Damon Gough, better known as Badly Drawn Boy.  It’s “Something to Talk About” as taken from the 2002 soundtrack album from the film About A Boy, originally a novel by Nick Hornby about a guy living off the royalties of a children’s song his dad wrote, yet finds himself unable to connect with children himself, or in fact with anyone, until – well, see the movie, or read the book.

But, for our purposes here, Badly Drawn Boy’s tune is a recurring musical theme that runs along side of the action, sort of as a bird’s eye-view to what’s going on the lives of the characters, which is what songs in a movie should do.

What also makes a truly exceptional song that appears in a film is that it also takes on a life of its own outside of the context of the film. In this case, author Nick Hornby, clearly a music fan (see High Fidelity), was a fan of Gough from early on, making him a perfect choice to compose music and develop songs for the soundtrack. Luckily, filmmakers Chris and Paul Weitz agreed.

And what a good idea! It turned out that it was some of Gough’s best work to date. On this track, Gough is able to make the song both cosy as well as expansive, folky as well as lushly realized. At his best, this is what has always shined through for me, with a lived in sort of sound built on a makeshift arrangement, which here is fully formed and supported, perhaps, by a greater budget than he enjoyed on his wonderfully musically jury-rigged pop gem of a first album (the excellent The Hour of Bewilderbeast). This to me is musical comfort food albeit against themes of uncertainty and vulnerability. 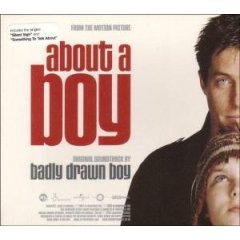 And where Badly Drawn Boy was only just established as a major act at the time he wrote this song and was involved in writing the soundtrack for the film, this song hits an emotional chord possibly because of that. This was quite a pleasant turn of events when you think that this wasn’t meant to be a part of his own artistic canon.

Bewilderbeast had been a release loved by critics and fans alike, and presented something of a high bar set, artistically speaking. A tuneful and emotionally connected record was what was expected of him. What better way to kick the sophomore slump in the ass than by writing all of the songs for a Nick Hornby-inspired film about characters stumbling through life?

“Something to Talk About” contains a melody that slips in and out of the movie soundtrack in various forms, which among other things demonstrates how far the melody is able to take the listener as incidental music as well as as a self-contained song. The song appears on the soundtrack album in it’s full song form, of course. But, the light and airy theme in the movie offsets some of the weightier messages around relationships, parenthood, acceptance, and the purpose of life and how we define it.