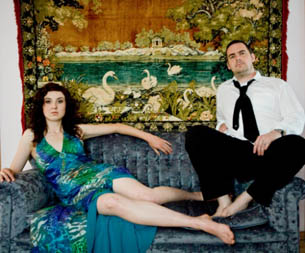 Listen to this track by Winnipeg-based art rock duo Querkus. It’s “Half-Acid Lee”, a cinematic John Barry-meets-prog-meets-pop song as taken from the band’s 2011 debut album Spaces Between the Leaves Make Room For the Stars. The song is a part of a richly-textured record that pulls in all kinds of influences which range from that 60s film music sound that also fueled acts like Portishead and early Goldfrapp, to the progressive rock complexity of King Crimson, with splashes of PJ Harvey and Kate Bush in there for good measure.

The band is comprised of two creative minds in vocalist/keyboardist Karen Asmundson and guitarist/vocalist Edgar Ozolins. Both are interested in amalgamating disparate styles and sounds together into an ambitious whole. This song is a shining example of the results of their efforts; a large-scale, and decidedly menacing track that is marked by the contrast of Asmundson’s voice against the abrasiveness of Ozolins’ guitar.

After featuring this track on my recent Winter Indie Round-Up post, I got in contact with the song’s writer Karen Asmundson. She and I talked a bit about the making of this song, about how the Querkus sound is interpreted in a live setting, about the pressures of making a debut record, and about visions of some very angry trees …

Oh, and I thought it might be fun to give away some copies of the record to you guys here. Details at the end of the interview!

The Delete Bin: “Half-Acid Lee” is an ambitious track with plenty of layers and musical styles woven into it. This is one you’ve written on your own.  Tell me about the process of writing it, and how it evolved from the writing stage into its current form on the record.

Karen Asmundson of Querkus:  I have to admit that I had a very clear idea as to what this track would sound like initially, which is nothing like it ended up sounding like on the record.  Originally it was much more electronic.  Drastic change came right from the beginning with Steve Martens’ fantastic percussion.  Edgar picked up on Steve’s vibe and diverted the previously downtempo electronic track into a land of heavy riffs and metal guitars.  At first I found the change shocking, but with time this version has definitely grown on me.

DB: There’s a real cinematic feel to this track, and to the record as a whole, which sort of hearkens back to the classic period where the album was meant to be consumed as a whole. How does this song fit into what you had in mind for the album?

KA: I’m so happy that this album fits together as well as it does . However, it was not planned that way.  There is an overlying cinematic sound, which is something that we have strived for.  All songs, including this one, just happened the way they did in complete disregard for any type of concept we may have had in mind.  This is one of the more driving, uptempo songs (and its not really all that fast).  But I thought it would be a good wakeup after the more meditative Amanda’s Concern.

DB: An age-old issue when it comes to ambitiously conceived recorded music such as yours is how it renders in a live setting. How has this impacted your approach to presenting the songs to an audience attending your shows?

KA:  For the majority of our live shows, we have heavily relied on electronics to bring the sound to life.  For our last tour we used a 4-channel playback device that could send out a stereo feed to the pa, a single feed to a bass amp to recreate the idea of a live bassist, and a click track, fed straight to our in-ears to help keep everyone together!

For our album release we took on the ambitious project of recreating the sound using live musicians.  Besides Edgar on guitar and vocals and myself on vocals, grand piano (a 9-footer!), and harp – we had 2 drummers, a tabla player, a sitar player, a string quartet, an organist/keyboard player, a bassist, a 2nd guitarist, and 5 backing vocalists.  To hold it all together we hired a monitor tech. That was a lot of in-ears! 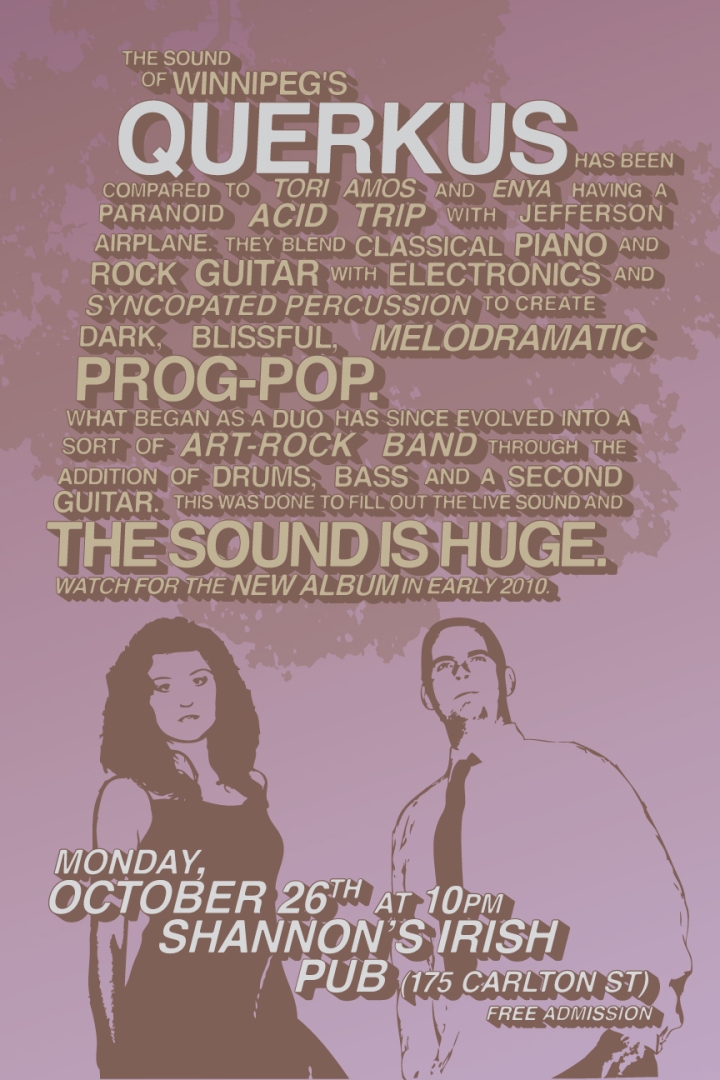 DB: The band originated in Winnipeg, arguably an underrated cultural center in Canada. How has the local scene helped to shape what you’ve accomplished?

KA:  I’d say that our biggest influence locally has been the thriving independent film scene here in Winnipeg.  We have performed and quite a few connected events such as the Winnipeg Film Group anniversary gala and scored a number of local productions.

We were also asked by the Cinematheque – our prized local independent art-house theatre – to write and perform a score to the 1925 silent film “Phantom of the Opera” featuring Lon Chaney.  That has been one of the most exciting a challenging projects the band has undertaken.

DB: That is exciting! How did that project come about?

KA: Yeah that phantom project was pretty wild – it was an honour to be a part of it.  Dave Barber of cinematheque and I had talked for years about doing some kind of live soundtrack to a silent film but weren’t sure what film to choose or when we would have time to do it.

Dave emailed me one and asked if we could do Phantom of the Opera in three months.  We agreed and started writing.  It likely slowed the progress of our album even more, but it was a great experience. I’m a huge fan of anything Phantom so I really enjoyed working with that particular imagery.

DB: You mentioned that the album was delayed ‘even more’ by that side project. Recording an album of this scale had to have been intense under any conditions. What did you take away from it, as a songwriter?

KA: I’d like to say that I now have a better sense as to how to write for a group and consider what everyone will do within that group – but I really haven’t.  I’m always just going to write what I like and worry about those kinds of ‘details’ later.

I also learned that its not necessarily the best idea to take five years to make a record and just focus on existing material rather than composing.  I wish I had kept writing during that time, or that it had not taken as long as it did, but to cheesily quote my own song Sandpaper, “If wishes were horses, the stampede would have killed her”.  What’s done is done.

DB: Alright. The name ‘Querkus’ – where does it come from? Do I detect an obscure Doctor Who reference?

KA: No you detect a completely different form of nerdiness altogether – I am a huge tree nerd.  I work as a forestry technician and love to study trees.  “Querkus” comes from “Quercus” – which is the latin name for oak.  When we started the band back in 1999 there was another band (on good old mp3.com) called Quercus so we changed the spelling.

I saw that Dr. Who thing too – a planet of killer trees. That’s a fantasy of mine; that the trees will one day exact revenge on humanity.  Come on, I mean we so have it coming…

You can find out more about Querkus at the Querkus MySpace page.

I’d like to give away some free copies of the album Spaces Between the Leaves Make Room For the Stars. I have five copies on offer. If you want one, let me know in the comments section and I’d love to send you one, first come first serve.