Here’s a clip of roots ‘n’ country siren from Suffolk, England, Lotte Mullan. It’s “Would You Be So Kind” as taken from her debut record Plain Jane. For fans of Emmylou Harris circa Wrecking Ball, this song may be right up your alley, with Mullan’s delicate vocal against echoey guitar, and shimmering Lanois-esque production.

Lotte Mullan embraced her own natural singing voice after an experimental period emulating the textures of Tom Waits’ gravelly voice of experience. Yet, Mullan is no stranger to the harsh realities of being a singer-songwriter in a cut-throat industry in her own right, putting herself forward as an opening act while acting as a tour manager, and gleaning an important base of knowledge of the recording industry while in a Work Experience program.

Reviewed extensively in Britain by MOJO magazine, Q Magazine, the Guardian newspaper, and beyond, Mullan is ready to bring her debut album, and her brand of singer-songwriterly prowess, to North America, the spiritual home of her sound.

I chatted with Lotte via email on the subjects of rural and urban states of mind, of the split between British and North American cultures and how it affects songwriting, and about what it takes to be an artist and a label owner all at the same time.

The Delete Bin: You’re originally from Suffolk, which is a rural area of Britain, and you now live in London, a bustling metropolis. How has the shift helped you to evolve your own craft?

Lotte Mullan:  The biggest difference for me is time. Growing up in a rural area meant I had swathes of time on my hands and being as there isn’t much to do you end up making stuff up! I definitely have an over-active imagination and was always coming up with stories as a kid, which I ended up putting to music.

Moving to the city was a stark contrast because everyone is rushing everywhere and there doesn’t seem to be any time to spare at all. I certainly felt that, juggling waitressing with college work and trying to write songs and play gigs. The funny thing is you just do find the time. I’ve just had to accept that I can’t sit down for ten hours straight and be all zen about it. I have to write when I’m on the bus, or in my head when I’m walking down the street. There are so many stories on the streets in London, I just have to collect them differently now.

DB: Being British, in some ways  you stand outside of the kind of the American roots sound you’ve created, culturally speaking. How does this sharpen your writer’s eye when it comes to crafting and performing songs in that tradition?

LM:   I have a gigantic love of American roots music but I’ve had to learn that I can’t copy it! I used to when I was younger, and I think it helped me learn the style. But a few years ago I began letting my British accent slip through and I think it’s more believable – I’m very British! I’m conscious that I can’t use American slang like “sidewalk”. And we don’t have “highways”, we have “motorways” (doesn’t sound quite as cool to me!).

I do have a romantic view of America, through music but also watching road movies (films!) and Country and Western’s which I was addicted to as a child.  I just want to tell a story in the most authentic way possible, so I choose my music to fit that. Sometimes it errs more of the side of Traditional British folk  which of course influenced your roots music, and then I dip into some British Rock ‘n roll which we pretty much stole from your Bluesmen! It’s a mish mash and a fascinating journey. I still have an awful lot to learn.

DB: Your musical journey has been a varied one, from your dad’s Beatles records, to interest in drum ‘n’ bass, to discovering Beth Orton, and beyond. Having had such a wide interest in the art of songwriting since you were a kid, how did you avoid trying to tackle all of your interests at once  on your debut, Plain Jane?

LM:  I’m not sure I did avoid it! Funnily enough, the recording itself was done in quite a traditional way (with) musicians in a room just playing. But it was mixed by a dance producer.  So, I think I got the best of both worlds. One of the reasons it took me so long to get it right was because I like so many different things. I’d still like to make a more rock ‘n roll record.  But also I’d love to make a pure country record. We’ll see what comes out on the next one! 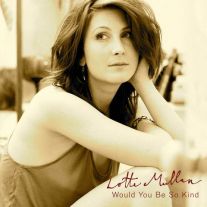 DB: Let’s talk about “Would You Be So Kind?”. Where did this song come from?

LM: It came from that uneasy feeling of loving someone who doesn’t love you in the way you want them to, and yet you want it so much that you can distort the reality in a really damaging way. Basically love makes you go crazy; give it an inch, and it will take a mile. The song is that moment of realization when you hold your hands up and say “I’ve given my all, hit me with what you’ve got” – it’s a very vulnerable moment.

DB: Tell me about Raindog Records. How do you balance your role as an artist against the interest of running a label?

LM:  With little sleep and a lot of hyperactivity! It can be a struggle, but I love knowing what’s going on and being able to contribute to the more mundane mechanics of it all. It can actually be very satisfying, as you know where you are. Sometimes as an artist you can just feel like you’re floating around, not really existing. I try to be proactive on the business side, which allows me to do my job as an artist better.

DB: Success has always been an elusive thing for touring songwriters, particularly in this era where exposure is so fragmented. What’s your personal finish line when it comes  to this?

LM:  If I can pay my rent and eat I’m happy. If I can do this, and take a holiday, and buy my Mum a good Christmas present, I’d be very happy. Ultimately, If I can tour with my band and continue to write songs, that’s a very satisfying feeling.

DB: Are there any upcoming plans to tour Canada?

LM:  Oh I’d love to! A lot of my favourite bands and artists are from Canada – Joni, Neil Young, The Be Good Tanyas. And my favorite author is Canadian – Margaret Atwood. Her writing has influenced me a lot and I have this picture of the (Canadian) landscape in my head. I’d like to see it for real (and see the bears!).

I’ll be touring the UK for the next few months with Plain Jane, but watch this space as I’m planning to drag her round your parts too! Hope to see you at a gig!

The album Plain Jane comes out in North America May 30th. You can buy it at the Lotte Mullan Official site.

To hear more music, check out Lotte Mullan on MySpace.

[Update: have a read of this article, which talks about Lotte’s recent million dollar film deal about her struggles and successes as an independent musician. Way to go, Lotte!]

5 thoughts on “Lotte Mullan Sings “Would You Be So Kind?””