Amid St. Paddy’s Day revelers, and incognito, inbred-moron, chronically shorn, marching white supremacists, our roving cultural reporter, writer Geoff Moore, took in a special event which is a part of the 2011 High Performance Rodeo Arts Festival at Calgary’s Glenbow Museum; Brian Eno’s 77 Million Paintings, a multimedia art installation of moving images and ambient music from a guy who made that sort of thing cool before most of us even thought to consider the idea …

The day ended long after sunset in a pub on the north side of the Bow River, muttering about amateurs, yellow school busloads of young people staggering about beneath the green plastic leprechaun puke buckets pulled down over their foreheads. Difficult to text somebody whilst heaving in the alley and the alphabet has suddenly expanded to 52 letters. Erin go bragh!

And it began downtown around lunchtime, avoiding marching, chanting bags of puke as Calgary’s tiny cadre of neo-Nazis took to the streets to promote white supremacy although, ironically, the twenty or so disaffected skinheads took pains to conceal their faces with kerchiefs, actions which bespoke the exact opposite of any sort of pride in a particularly odious credo. It would be embarrassing, indeed, if your family and co-workers learned you were such a vile little cretin.

Between the pea soup tinges of unseasoned drinkers and the black garb of our local Nazis there was the tranquil spectrum of “visual music*,” Brian Eno’s 77 Million Paintings installation mounted at the Glenbow Museum as part of the High Performance Rodeo 2011 arts festival. Eno, whose surname is a gift to crossword constructors everywhere, is a postmodern renaissance man: composer, producer, musician, artist, avant-garde pioneer. He is the Nicholas Negroponte (Being Digital) of rock, someone who intuitively grasped technology and all its implications and potential while the rest of us were still trying to figure out how to hook up the cables.

His work is scattered throughout the home collection as a member of Roxy Music, producer and collaborator with David Bowie, Talking Heads, and U2, and on his own in Another Green World and Ambient 1: Music for Airports ; essential listening in these irksome and paranoid days of 21st century air travel. Eno albums don’t get heavy airplay; they tend not to go over well at impromptu house parties, nor do they particularly suit contemplating the state of this miserable world through the bottom of a glass.

The Glenbow, while a fine institution, is struggling mightily to elevate itself into the upper echelon of the Canadian cultural establishment. While you will never utter the Glenbow’s name in the same breath as the Royal Ontario Museum, 77 Million Paintings, which would have been equally at home the Telus World of Science, was quite a coup for our town’s museum. Eno was in town for the installation’s opening in early January. One suspects the opportunity to sample the antique keyboard instruments and primitive synthesizers housed at Calgary’s renowned Cantos Music Foundation rather than the winter weather was the more compelling lure. 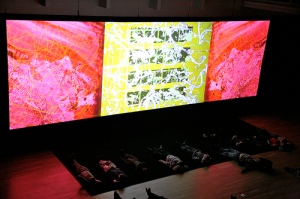 Inspired as an antidote to the dead space created by a turned off flat screen TV he saw hanging on a wall, version 1.0 of the “generative software*” was first released in 2006. 77 Million Paintings is a constantly evolving blend of Eno’s image and sound scapes and the odds of one combined sequence repeating are, oh, say, one in 77 million. There are better chances to be had paying the idiot tax and buying a lottery ticket.

Suffice to say 77 Million Paintings is no mere PowerPoint presentation, and wondering what you missed before entering the darkened gallery could make you crazy. The couch and the black leather armchairs facing the rectangular screens arranged in a diamond pattern on the wall were extraordinarily comfortable. The central cog of the diamond, four abutting rectangles, resembled a swastika less its extra arms, an observation that would not have been made on any other day but this one.

The cog’s colour always mirrored that of a second, much smaller, lone diamond set on the lower left-hand corner of the display wall. Two piles of what appeared to be crystals broke up the floor space between the viewers and the screens. Later investigation/furtive souvenir hunting produced a handful of rigid foam chips painted silver.

It is so peaceful and hypnotic watching coloured light in the dark. The images change so subtly that you miss the transition even while concentrating to catch one in the act. The ambient sounds enhance and do not intrude, you hear them but don’t actually listen to them. The large scale visual format and a proper sound system seems to be key; it’s difficult to imagine 77 Million Paintings having the same impact on a single, standard computer monitor.

Here in the Glenbow, it’s a bit like being stoned, closing your eyes and listening to Pink Floyd through headphones.

Maybe closer to watching a laser light show synchronized to (Peter) Gabriel-era Genesis in a planetarium.

And it’s certainly nothing like contemplating the 1961 copy of The Death of General Wolfe hanging 20 metres down the hall. This is a complete and utterly new experience with the arts. Who knew there were any left? And this feeling inside, it’s not just an absence of anger, it might actually be something positive, something, something like happiness or at least contentment.

Geoff Moore is a writer who lives in Calgary. I never would have pegged him for an ambient music fan, although the comfy chair thing makes a lot of sense.