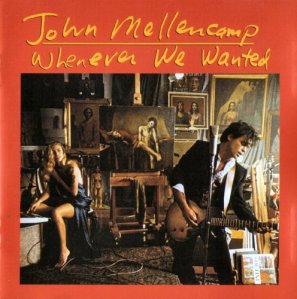 Here’s a clip of radio-friendly  singer-songwriter and Hoosier roots rock hero formerly known as ‘Cougar’ John Mellencamp with his 1991 hit that out-Stoneses the Stones. It’s “Get A Leg Up” as taken from Mellencamp’s Whenever We Wanted. This album is his first not to feature the ‘Cougar’ moniker, as given to him without his permission by the record company when his first album came out.

R&B, rock ‘n’ roll, and pop music is rife with stage named artists from Bo Diddley, Howlin’ Wolf, and Muddy Waters, to Bob Dylan, Ringo Starr, Elton John, David Bowie, Elvis Costello, Sting, Flea, Lady Gaga, and on and on. These artists created and wore their names to suit their music, and their personas on stage. Mellencamp would spend the rest of his career fighting for his name. And here, he claims it, with a knock-it-out-of-the-park rock ‘n’ roll tune that brings it all back home.

In many ways, Mellencamp is one of the last songwriters of a certain era and a certain stock, unafraid to be his own man artistically, while still getting mainstream attention and succeeding in getting smash record sales, too, which would be his for decades. In this, he arrived on the scene just in time, delivering era-defining hits in quick succession, particularly from 1982 to 1987, when his voice was a welcome, and familiar rasp on commercial radio.

By the ’90s, he was still going strong of course. But, the decline of pop music as a mainstream artform, driven more and more by a bottom-line obsessed music industry had begun to take its toll. As if to flip the bird to this, Mellencamp dropped his “Cougar”, and decided to release a record that framed his strengths. His first “Cougar-less” album represented a big take that to the machines of music marketing, while also offering one of my favourite singles by an artist who had clearly come to a place where he felt free enough to shake off their shackles.

Since this period, Mellencamp’s worked with producers ranging from Babyface to T-Bone Burnett. He’s recorded pop records, folk records, experimental R&B albums, and has appeared on stage in tribute to his heroes, like Pete Seeger and Willie Nelson, and alongside his contemporaries like Bob Dylan and Sheryl Crow. He’s been an actor and a director, one of his films being Falling From Grace, on which he was both. He’s been politically active as well, being a proponent of the agricultural charity Farm Aid, and various causes in support of the American Democratic Party.

Recently, he’s been quoted on the state of pop music with regard to how artists are treated and deveoped (or in many cases, not developed):

There is no time for the music to develop in a natural way that we can all embrace when it ripens and matures. That’s why the general public doesn’t really care. It’s not that the people don’t still love music; of course they do. It’s just the way it is presented to them that ignores their humanity. (read the full article)

And of course, it’s pretty ironic that I’d write about him here, considering John Mellencamp’s stance where music and the Internet is concerned. To make a long story short, he’s against the Internet as a source for consuming music. But, life is full of ironies as any great songwriter knows, not in the least of which that Mellencamp is involved on multiple online platforms to help new generations of fans discover his music.

12 thoughts on “John Mellencamp Sings “Get A Leg Up””