It seems that a storm may well be threatening our very (quality music-consuming) lives today, good people.In this month’s guest post here at the Delete Bin, pop culture vulture and writer Geoff Moore gazes out on the plain once again, this time with a belief in democracy and in pop greatness held under pressure. Does the age of social media, social sharing, and the democratization of content mean the death of pop artistry too? Is it the end of the world as we know it where pop music chart action that’s unfettered by crossover marketing is concerned? 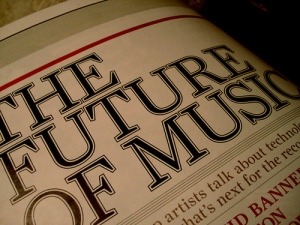 According to the whack-jobs and nut cases whose URLs constitute the last few dusty pages of the Internet, the Mayan Long Count calendar dictates December 21, 2012 as the end of the world as we know it. Fortunately we’ve some months yet to get our affairs in order and due diligence is the order of the day as the lunatic fringe may be right this time. If you’re not as jittery as the ruler of an Arab police state, you should be. Signs of a pop culture apocalypse are all around us.

Following Mick Jagger’s Solomon Burke tribute on the 53rd edition of the Grammy Awards the Washington Post was compelled to report that the voice of the Stones is not dead, contrary to tweets trending globally. The paper described the social media phenomenon as a hoax.

It wasn’t; because a hoax involves some forethought and planning. It’s simply that twits are unable to express themselves clearly in 140 characters and their twitterpated followers lack the attention spans to read, interpret and comprehend said 140 characters which alluded to Jagger being past his prime, hence a sardonic R.I.P. from a media personality trailed by illiterate electronic acolytes.

Another reason we are no longer able to communicate is because we are deaf. The cast of the television show Glee has racked up 113 entries on the Billboard Hot 100 in less than two execrable years. Elvis Presley slides down to number two with 108. Pour yourself a stiff one and contemplate this state of affairs. Make it a double. Neat. How did it all come to this? The sales of digital music actually declined for the first time ever last year and that’s despite iTunes launching the Beatles catalogue online. Yet people are still purchasing ersatz show tunes by teenage actors. And, dear God, they must be listening to them too.

Who are these people?

We must assume they are subversive agents of the counterculture because after all, the cast of Glee has been featured on the cover Rolling Stone magazine, the Little Red Book of the left. And the people will not be denied.

Rolling Stone, partnering with a shampoo, whose PR flak maintains that music is one of the brand’s core equities(!?), recently announced a contest in which readers will get to vote on whom the publication features on an upcoming cover. Sixteen unsigned bands (including one called the Sheepdogs from Saskatoon, SK) are vying for the honour. RS publisher Matt Mastrangelo told the New York Times that the rag’s staged battle of the bands is “the antithesis of what American Idol is.”

Sure smells like a cheesy talent contest from here.

Perhaps the magazine should return to its area of expertise, like asking Democratic presidents what their favourite Dylan songs are.

When the end comes you just want it to be sudden, over and done with in an incomprehensible, blinding, incinerating flash. But the Four Wild Horsemen seem to be content just cantering along and dragging us behind them through the popular muck of these times.

Geoff Moore lives and works in Calgary, Alberta. His basement is loaded with canned goods, and 45’s.