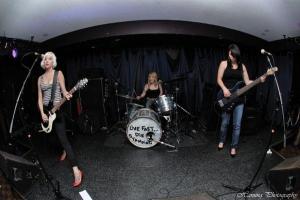 Here’s a clip of Hamiltonian punkabilly-flavoured rock/pop punk rock  trio The Barettas.  It’s the video for their single ‘Touché”.  You can currently download the single for FREE on their bandcamp page, good people. The single, with an equally excellent B-side in “Black Sheep” was released last month.

The band is made up of three women – Katie Bulley (guitar, vocals), Kate Kimberley (bass, vocals), and Carly Kilotta (drums) –  who’s average age is currently 22, yet sound as though they’ve been at this game for twice that time at least. Since their formation in 2009, the trio has rubbed elbows in support slots for acts as critically acclaimed as the Diodes (!), The Fleshtones (!!), The New York Dolls (!!!) and A Flock of Seagulls (!!?) among others.

Among the references you’ll find about this band in the press are comparisons between their hometown of Hamilton, Ontario, and the soul music, blues, and garage rock mecca of Detroit Michigan.  Sure, both are industrial, blue collar towns. Both are criminally left behind in comparison to other cities when it comes to accolades of cultural importance where pop music is concerned (although, KISS never wrote about Hamilton – or they haven’t yet).  But, do the comparisons end there?

Well, I decided to ask Katie that question, among others including questions about dayjobs, about what a support band can learn from a headliner, and about what it is to be a woman in a 21st Century rock ‘n’ roll band.

The Delete Bin: You’re a Hamilton band, known as, rightly or wrongly, a blue-collar town. What’s your take on this idea that blue collar cities – like Detroit, to which Hamilton has been compared –  have the upper hand when it comes to immediate, to-the-bone music?

Katie Bulley of The Barettas: Funny, we were just in Detroit this past summer for a Hole show (I jumped on stage and hugged Courtney Love then got thrown out   – ahaha). Anyway, while we were there we drove around a lot and came across tons of abandoned and burnt down buildings, and all together very rough areas: a lot like Hamilton.

We met alot of hard-working people with heavy backrounds. And for me, that’s way more inspiring than a clean cut suburb, where kids parents are sheltering them and paying their way through life. But maybe I’m just jealous.

DB: My ear tells me that your music has sprung from a number of sources – the Stooges, a bit of rockabilly, the Strokes, even a bit of Motown. What is your sense of that history as you craft your sound and approach to performance?

KB: I try to learn and hear as much as I can about music history. I have book after book about bands, and their stories. It’s all I’m really interested in hearing about, and I take little nibbles from it all. No bites though.

DB: Tell me about the video for the single “Touché”. It’s got a vintage look to it, like it was shot in the ’40s. How did the idea of the shoot come about?

KB: Our good friend Chris Juraschka is attending a film school in Toronto and he offered to shoot it. He also said it could be done in real film but it would take longer. We loved the idea of having it look grainey and old so we went with it. It not only goes with our style and music but it also sets the video aside from alot of videos that are coming out now.

DB: You guys have mentioned that you have day-jobs which ‘puts gas in the van to get to the next gig’. How does one life during the day in day-jobs  and the other at night on stage comes out in your writing?

KB: I work around a lot of different people everyday. A lot of those blue-collar workers come to the bar, and I listen to how their days went ,or stories from their everyday lives. So I might have subconciously been inspired by that. But, I don’t tend to think about my day job while I’m writing.

DB: You served a lot of time as a support act for some prominent acts. In watching them in the wings, what are some of the most important things you’ve learned when it comes to engaging a live crowd?

TB: Don’t do drugs. Quit smoking. Move around. Be energetic. Have something to say in between songs. Smile. Don’t burn bridges.

DB: Being an all-female band, do you feel that you have to work much harder to prove yourselves in that live setting, even in the 21st Century?

Thanks, Katie. And thanks to the Barettas!

You can get the 7″ single Touché for free, so you probably should. Also, be sure to buy The Barettas Bang Bang, the band’s EP on CD Baby.