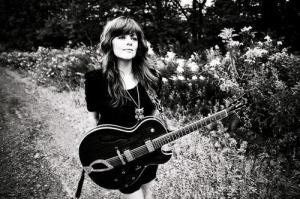 Listen to this track by unabashed rock singer-songwriter from Sydney, Nova Scotia, Carmen Townsend. It’s a key track off of her upcoming record Waitin’ and Seein’ released January 25, “Without My Love”.  It’s one of many tunes she offered to an adoring crowd on January 11 at Vancouver’s Railway Club (579 Dunsmuir Street) to ramp up the release.

I was invited along to the event to see the show and to get a chance to meet Carmen. After the show, I got to ask her about how the record came together, about how she felt free to share her songs to begin with, about how Loretta Lynn figures into her music, and about her next exciting step as a performer; going on tour with a couple of her heroes. Here are my impressions of the show, and that brief interview on video too.

The Railway is an unassuming place from the outside. But, when you get in, it’s filled with a warm, friendly vibe that’s been graced a number of times by the presence of some sterling acts in rock and pop music, many from Canada, but also from points abroad. 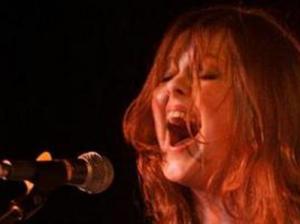 No less sterling was Carmen Townsend and her rhythm section Thomas Allen on drums, and Shane O’Handley who alternates with Townsend on bass and guitar, passing instruments back and forth on stage as if at a plugged-in, rocked-up version of a Nashville guitar circle.  The power trio played a number of tracks off of the new record with supreme gusto, referencing a musical space that meandered stylistically between Led Zeppelin and The Pretenders with their own indelible mark and demonstrating a level of musicianly comfort between each player that made you just want to be in a band just like them.

After the show, Carmen propped up the bar and talked to fans, many of whom had followed her from Cape Breton Island, her point of origin. She is appreciative of her audience, and very personable. So, luckily, she also had a bit of time for me. Here’s our conversation, and pardon the quality (although it’s in authentic rock club red).

So, as mentioned, in the coming months, Carmen will be touring solo as the opening act for Ann and Nancy Wilson, and Heart on their Canadian dates. Carmen was bursting with the same excitement as you see here over the news while announcing it to us on stage. She’d only found out on the day of our interview that she’d been hand-picked by the Wilsons to be their opening act.

Carmen, from the stage: “I hope I don’t forget myself and starting singing “Crazy On You” in their tour bus shower like I used to at home…”.  This proves the point, I think, that rock goddesses are still rock fans.