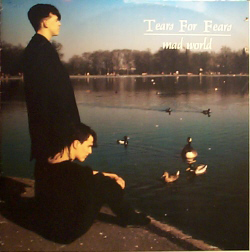 Listen to this track by proto-emo duo and Arthur Janov-reading hit-makers Tears for Fears.  It’s ‘The Hurting’, the lead track off of their exemplary 1983 debut record The Hurting, an effective concept album about dealing with childhood trauma in adulthood from two guys who were only barely adults themselves when they recorded it.

I should open this by saying that the Hurting is one of those records that I absolutely ate up when it came out in 1983. I was fourteen, and while my childhood up to that point was not traumatic exactly, I found that the sentiments to be found in the songs on this record resonated with me, and with most of my friends too. Perhaps it’s because the band’s authors, Roland Orzabal and Curt Smith, were writing with their own fourteen-year old selves (and younger) in view, although they were in their very early twenties at the time.

Stylistically, you are getting a vintage slice of early 80s here, with lots of Kraftwerk-influenced keyboards and programed drums. But to contrast those textures, you’re also getting post-punk electric guitar that we would welcome again in the 21st Century. Even more oddly for the time, you get a folk-rock middle-eight (“take the time with the things you know, learn to cry like a baby…”). It must also be said that Orzabal and Smith were, and are, very good singers.  This brings the lyrics to the fore, which on this record was paramount to its success with me, and my circle of friends at the time.We knew all of the words.

One of the reasons I think that this record hit me and so many of my friends so profoundly when it was released, was that being a kid was hard for us in an imperceptible sort of way. And hearing it mirrored in the music we were hearing helped to remind us that everyone feels disconnected, and a bit at war with ourselves to a certain degree. Sometimes, when you’re a kid, things really do feel like ‘an horrific dream’, because all kinds of things are happening over which you have no control. Your body is changing, your emotions are totally getting away from you as a result, and you still live under the yoke of your parents, who are completely disconnected from what that is like.  At least, that’s how it feels. These are the underpinnings of what this record is about, what it lays down its foundation on. It connects. 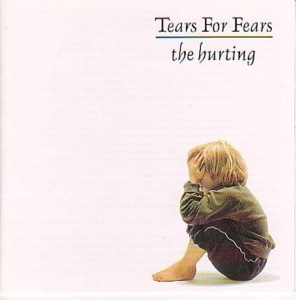 I imagine being a kid is still as hard, if not harder than it was then.  I mentioned emo earlier, a subset of rock music which a record like this arguably foresaw, if not stylistically then certainly in terms of subject matter. However, this song, and others on the album, is not about listening to a singer talk about their personal externalized pain so much as it is a collection of songs that encourage an audience to think about theirs, just by identifying with the narrators of each tune.

Tears For Fears got a lot of play from this debut record before they really hit it big with their 1985 follow-up, Songs From The Big Chair. Before SftBC broke in America, the band scored a few hits on the Hurting in “Pale Shelter”, “Change”, and “Mad World”. The latter song, “Mad World”, which had been an early single by the band even before the debut record had come out, enjoyed something of a renaissance through its use in the 2001 film Donnie Darko. That version was by Gary Jules, rendered in a stark solo piano arrangement.  The themes of teenage alienation in the film, and in the song off of a record that spoke to those same themes nineteen years previously, proved to be enduring indeed.

You can find out more information about this band on the Tears For Fears Wikipedia page.

For some direct info, consider following Curt Smith on Twitter, a ‘celebrity’ who actually follows back and interacts too. Actually, Smith is a huge social media enthusiast, choosing collaborators via Twitter for musical collaborations.  Check out his site at CurtSmithOfficial.com, which includes a blog, video, and an online show Stripped Down Live, too.

2 thoughts on “Tears For Fears Perform ‘The Hurting’”