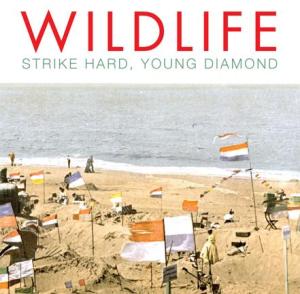 Listen to this track by epic Toronto art-rock-via-power-pop concern, collectively known as Wildlife. It’s ‘Move To the City’ a track taken off of their full-length release Strike Hard, Young Diamond released November 16. The release is an expanded version of an EP released earlier in the year under the same name, and positively reviewed across the board by local Toronto press.

The theme of ambition and self-awareness seems to shine through in this tune. This is a tale of listlessness and the pesky feeling that all that is promised by our culture about the rewards associated with getting a job and growing up may not be all they’re cracked up to be.

The record is described by the band themselves as “an understanding of what it is to be naive and full of spark: it embraces our failures, nurtures our successes; and most importantly, it celebrates them“.

I spoke to Wildlife member Dean Povinsky on behalf of the band about anthems, maintaining balance within a band, about  the goal of being on stage and being in the audience at the same time, and about the vital importance of continuity in following where artistic impulse lead . Here’s that interview.

The Delete Bin: There seems to be some good old-fashioned rock n roll anti-conformity sentiment in this song – against ‘the professional suit and tie’ that ‘doesn’t sound like us’.  In an age where songs on pop radio are talking about being a billionaire, and being on the cover of Forbes magazine, do you feel that rebellion in rock and pop music is being lost in the mainstream?

Dean Povinsky of Wildlife: In mainstream music now, I guess that could be perceived as true. Western culture seems to go through cycles of having some kind of “anti-establishment” messages being popular. But you have to remember that all those kind of things are usually a reaction to some other trend. Like Vampire Weekend being almost punk in their decision to appear like college boys.

But I like suits and ties. We’re not all that rebellious or anything in our lyrics, I don’t think. But there’s definitely a constant kind of frustration with the way things are, or have become. Not necessarily in a political way, but more emotional or musical or psychological. That song is more about how much it can suck to make important decisions and to reflect on your past self vs. who you may become.

DB: “Move to the City” seems like an anthem, that you’re actually speaking for your audience. How do you see your role as a band where you audience is concerned when writing songs?

DPWL: Our role is to be entertaining, I guess. On the other hand, we are the audience. That’s always been a very weird part of playing music for me. You want to simultaneously be on stage and be in the audience, most likely because it’s one experience you can never have. In terms of writing songs though, I just write songs that I want to hear that don’t exist yet. I just happen to sometimes like really poppy stuff.

But there are times when lyrics can sort of speak out for an audience, even though they aren’t really meant to be active in that way. In this case I think it’s more for myself and the people I know, looking around at all the patterns that are developing and who we’re becoming, and how people are forced into making certain calls.

DB: It strikes me that this a pop song that would fit nicely on rock radio, yet there’s textures you’ve added that sound  almost avante garde, specifically the noise-rock touches in the intro.  How do you approach arrangements? Are they worked out in the studio, or are the parts imagined at the writing stage?

DPWL: In my eyes, our band has always been about injecting pop ideas with something that twists them and strives to make them ideas that avoid totally generic sounds. So we might take a totally cliché notion, but then go to battle with it until it sounds like nothing we’ve really heard. On this record most of the arrangements were worked out in the writing stage and then again over time as it sat with the band. There are certain times in the studio where songs really called for experimentation to get things moving in a new direction, which is always very fulfilling, if there’s ever time for it. I think our next record will involve a lot more of that off-the-fly funny business.

DB: Your music gives away a number of influences, but what is it that each member brings to the band which unifies them?

DPWL: Hahaha. That’s funny. Everyone you know has that one great quality that is also the tragic flaw. It can be so apparent at times with Wildlife as individuals, and I think it can be transferred to the collective: with this band, the varied tastes and sensibilities can be our greatest strength.

In earlier times, it could be a heavy source or confrontation. But we’ve learned how to deal with each other on that level now. The unifying factors each member brings to the group is a ridiculous, life-saving sense of humour and need to laugh, without which we would cease to exist, as well as dedication to what’s best for the band and to the friendships that exist within that.

DB: The record is an extension, a fuller version of an EP you’ve released earlier.  How does a sense of continuity play into what you guys are doing, as an EP grows into a full-length album as it’s done in this case?

DPWL: Actually, as far as Strike Hard, Young Diamond is concerned, it’s the opposite. We started making this thing in August 2009. It was supposed to be four days of tracking, three days mixing and done. What prompted that idea was a very tight budget and a desire to have something new immediately. As it went along, we realized it was growing bit by bit and we’d be doing ourselves an injustice to not see where we could take it. When we finished there were nine tracks, and then cut it down to five so we could put out the EP. We didn’t want to release the full-length then for a couple reasons, one being that it felt like it needed more. So we went back to the studio and did two more full songs and an interlude part to put a cap on it all.

Continuity is a pretty important part of how we operate. Any time you make art it needs to have unifying aspects, a few things that run continuously and thematically thorough what your doing to give it meaning. We like to flow between genres and apply different ideas through our own filters and personal sort of “style-set” that we’ve created. On one hand, we’ve tried hard to make that style unique, and on the other we haven’t tried very hard at all, because the things that usually songs together are the things that come most naturally to us. So I don’t think we ever really feel the need to write something that sounds like a Wildlife song on purpose.

The songs on our record are meant to be played live, and that might be the most important thing: We don’t want to trick you into liking our music when you hear it on the internet only to have you see us live and realize you’ve been duped. We’re at our best when we play together in front of people.

DB: Where does Wildlife stand in the pantheon of Toronto bands coming through a respected series of music scenes out of Toronto? Do you feel an affinity with other bands, or a certain Toronto tradition?

WL:  Toronto has churned out some amazing musicians over a lot of years. I counted once and I think there are something like six billion bands in this city, for real. We’ve never really felt part of any kind of scene really. Certain kinds of music have been very pervasive ever since I’ve lived in Toronto, and it’s never really been “what we do”, even though I love a lot of the bands in this place.

We’ve actually found it kind of difficult to find Toronto bands that are actually a good match for us to do shows with. I think maybe 8 or 10 years ago, we would have had an easier time fitting in, not aesthetically but communally. My favourite people to play with are The Writers’ Strike, from Halifax, and Dark Mean, from Hamilton Ontario. Rich Aucoin from Halifax is another one.

No offense to all the super-nice, amazing people and bands that we’ve met here, but Toronto can be a bit weird at times. People don’t want to give too much of themselves away. Just get over yourselves and fucking dance already.

Thanks Dean, and to Wildlife!

To hear more music and for news of upcoming shows, Check out Wildlife on MySpace.

3 thoughts on “Wildlife Perform “Move To the City””