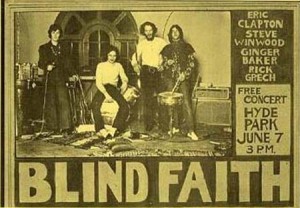 Listen to this track by bona fide, albeit short-lived, supergroup Blind Faith, featuring Steve Winwood (vocals, keyboards, guitar), Eric Clapton (guitar), Ginger Baker (drums), and Ric Grech (bass guitar).  It’s “Can’t Find My Way Home” as taken from the band’s 1969 self-titled and sole LP Blind Faith, a folky and atmospheric gem that sits as a centerpiece to the record, and remains to be a celebrated track, covered as it was by acts as disparate as  blues-rock maven Bonnie Raitt to No Wave band Swans.

For many, the era out of which this song and this group came presented new vistas in rock music, particularly those holding the purse strings at the major labels. In this case, it was three – Polydor, Island, and Atantic Records, distributed through the Atco label.

All the while, the name of the band was something of an ironic nod to the fact that for all of the hype and expectations surrounding it, the band members themselves knew that it was a union assembled informally and without much of a plan for world domination.  Despite this, label support would roll out formal preparations for a tour and an album, counting their money as they did so in an act of, you guessed it, blind faith.  I mean, what could possibly go wrong?

By the end of the 60s, rock had become an extremely lucrative industry in contrast to the early years of the industry. Even at the beginning of the 60s, the pop music industry was largely looked upon as a sideline to other business interests, like electronics and even hardware for the military. But The Beatles, and their appearance at Shea Stadium in 1965 alone, had proved that money could be made just from sheer volume of record-buying, concert-going kids with disposable incomes.  This new demographic reflected a new economic phenomenon to be exploited. Thus was an incarnation of the music business born, one for which it would be known for decades afterwards.

So in this paradigm, when Cream broke up in 1969, the label bosses gasped in horror, just because the band had been a significant earner.  To a certain degree, the same could be said of Traffic, which had broken up (temporarily as it turned out) by 1969. So, when they got wind of jam sessions between Winwood, Clapton, and Baker , their assurances that money could still be made from these proven name players quelled their fears and ignited the hype machine.  Ric Grech from Family was recruited on bass, and plans for recording and touring were on!

But for the members, Blind Faith was something of a rebound band, each player still recovering from breakups of or departures from other bands. This aspect presented problems that sat at the heart of the group dynamics to a certain degree. Also, the new union came out of informal jams, not meticulously planned out sessions, or prolific songwriting.  The band was underrehearsed and light on material by the time they were signed, and promoted.

The first gig was June of that year, a free concert in Hyde Park.  The crowd loved seeing the superstars on stage together. But, the players themselves weren’t terribly thrilled with the results. Still, what little material they had was padded out with Cream and Traffic tunes, crowd-pleasers all. It would be enough to send them out on the road, and into the studio as planned. But once the record came out , there were other complications besides, including a controversy worthy of Spinal Tap once the record was released.  There was a problem with the cover.

Depicted on the offending sleeve was a pre-pubescent girl, topless and holding what appeared to be a silvery phallus; not exactly bible-belt friendly.  A new cover was arranged for American release.  Despite the controversy, the album was a huge success, under the care of producer Jimmy Miller. Yet, the band burned, as they say, twice as bright for half as long. They toured with bands like Free, Taste (featuring storming blues-rock guitarist Rory Gallagher), and (significantly) Delaney & Bonnie.  But, by October of the same year, the band was no more.

Still, in the end everyone came out on top.  The band created at least two highly respected tunes to be celebrated down the rock ages by the authors and by others, too; this one, and Clapton’s “The Presence of the Lord”. Ric Grech joined Traffic when Winwood and Jim Capaldi reconvened, and recorded a succession of albums that many agree were highlights of the bands arc. Ginger Baker formed Ginger Baker’s Airforce. Later, he’d become a producer and studio owner in Nigeria, and re-acquaint himself both with Afrobeat as well as its inventor, Fela Kuti. And Clapton, tired of being a bandleader and simply wanting to play without all the pressure, joined Bonnie & Delaney’s band, not before appearing with John Lennon & the Plastic Ono Band in Toronto for the ‘Live Peace’ shows.

And what of the poor, unfortunate labels that had tragically lost their cash cow so soon in a deceased Blind Faith?  No problem. Another supergroup had come along, and had proven itself quite soundly over the course of over a year by 1969; a little band called Led Zeppelin. By the next year, bands were sent on high-powered trans-Atlantic tours, eventually in rented 747s, hiring armies of roadies, trashing hotels, buying mansions, and appearing in sports arenas all over North America, and the rest of the world too.

The age of the STADIUM ROCK SHOW had dawned!

For more information about Blind Faith and their sole album, check out the Blind Faith Album Wikipedia entry.