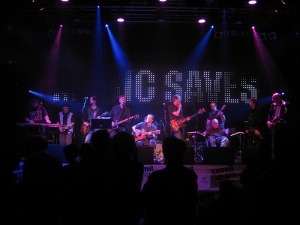 Vancouver music scene including Odds, Jim Byrnes, John Mann from Spirit of the West, Barney Bentall, Dustin Bentall, Dan Mangan and many, many others.  It’s their take on Dave Mason’s “Feeling Alright”, an upbeat song about not being alright immortalized by Joe Cocker’s version.

The video was created with the help of local radio station The Shore FM, where the promo guy turns out to be an old friend of my brother’s! Small world!

The video  stands as an expression of a music community supporting the idea that music is an essential to life, not a luxury.  Therefore, everyone has a right to express themselves through it, even those who have been born with certain physical challenges, or have had life changing events and are not able to play instruments or sing in conventional ways as a result.

I went to a launch of this video at VENUE, which is an, um, venue on Granville Street here in Vancouver last Wednesday with my curvaceous and 1000 Watt smiling bud Emme Rogers. The musicians on the track played a concert for an appreciative crowd.  And a great night was had by all!  It was a privlege to attend, and to thank some of the musicians for their work.

Did I have the guts to talk to Odds songwriter Craig Northey, musical director of the project, producer of the track,  and all-around hero of mine? Nope. Oh well. Maybe next time.

To find out more about the work that VAMS does, check out the Vancouver Adapted Music Society site.  You can tune into the Shore FM online, to check out what they’re about, including their propensity to champion a number of local acts from my neck of the woods and play their music on the radio!

You can also see some cool making of videos of the Music Saves II project which are pretty insightful about music therapy and the work that VAMS does.

[Update P.S – read this article, which includes an interview with Craig Northey on the Music Saves project]