Listen to this track from North-East England frenetically inclined four-piece the Futureheads.  It’s their take on the 1985 Kate Bush classic ‘The Hounds of Love’, a song taken from her album of the same name, and appearing on the eponymous 2004 debut The Futureheads, for this band. Never has a less macho take on love been represented by a group of guys from a tough, working-class region of Britain.

Around the time this record came out, there was something of a late 70s-early 80s post-punk revival going on, which was fine with me since this is something of a favourite period for me personally.   And this record, and this song, was one of the standouts, influenced as it is so clearly by the kinds of sounds pioneered by Gang of Four (who’s Andy Gill threw his hand in production-wise on selected tracks), Wire, and early XTC.

One of the hallmarks of this era as carried over by the Futureheads of course is their voices, which are presented here in their own accents; a classic example of the punk rock ethos. But, there’s more to the vocal strengths of this band than their unique accents.

There may be a lot to make you think that this cover version of Kate Bush’s rhythmic, soft-focus study on the impulse to run the other way when love comes a-stalking is something of a irreverent take on the song.  Perhaps it is. It’s re-positioned with crunchy-jangly guitars and male voices that serve to contrast the original source material, for sure.  But, a lot of what I get from this version that really adds to the song is that fear of love, and admitting ‘I’ve always been a coward’, knows no gender division. Love is indeed a force to reckoned with.  It’s not for wimps. 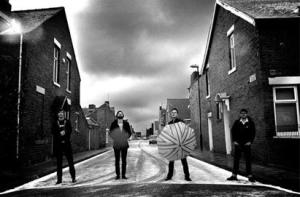 That’s one of the more interesting dynamics happening here. Usually, a lot  of the best material in the post-punk idiom is about detachment, non-involvement. This makes ‘The Hounds of Love” pretty ripe for coverage in this mileu.  After all, that’s what the song is about; detachment, out of fear of what might happen when one’s heart is given over to another. Yet, in this song, it’s not a single voice we’re hearing. It’s several, singing as moving parts in a machine.  And what’s more detached than a machine? It’s an obvious approach to Bush’s song that hadn’t been explored until the Futureheads came along.

Vocal arrangements in this respect is something of a strength that the Futureheads demonstrate on a number of tracks on this record.  The ‘oh-A-oh-A-oh-oh’ part, something more than just a subtle texture that it is in the original.  In this version, the part kicks the song off and puts it front-and-center.  It sounds like a kind of mechanized choir. In this emphasis on interlocking vocal lines, the band seem to take their influence from doo-wop a capella bands as much as they do from post punk.  This provides something of contrast again, with the warmth of traditional pop harmony mixed up in the cold detachment usually associated with post-punk guitar music.

A great deal of criticism was leveled at bands likethe Futureheads at the time, charging them with being derivative.  But, answer this; who would have thought to mix doo wop, Gang of Four and Kate Bush, and sing it in a Sunderland accent?

For more information about the Futureheads, be sure to check out the official Futureheads site.

And for more music on subsequent releases, you can investigate The Futureheads’ Facebook page.